It's spring, and in a beekeeper's world, that means time to do some hive splitting, before they do it themselves. That's what has happened when you see swarms of bees on car fenders, or fences or wherever -- the hive is too full, the queen in the hive is getting old, so the bees hatch out a new queen and the majority of the hive's population breaks away to start a new one, once they find a place to live. It was a swarm that started us in this journey, and we get a bit excited when we hear about swarms, as long as they are not from our hives. Losing that many bees is never a good thing. That said we would never say no to someone who calls to tell us they have a swarm on their property and want us to gather it up! 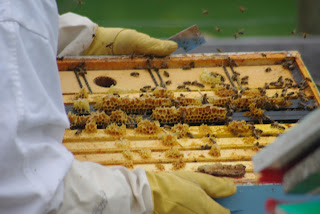 The first thing we need to do making these splits, at least at this time of year, is make sure we have some new queens. Our queens this year are from Hawaii. Each one is in its own queen cage, along with a few assistants to take care of it. At one end of the cage is 'candy' for them to eat on the way, and we give them water by putting a few drops directly on the cage. They don't need a lot, but they still do need some. When we put them into the hives, we will take the plug out of the cage to allow the bees in the hive to eat their way in, while the attendants eat from the inside, trying to get the queen free. This teamwork and time allows the bees in the hive to acknowledge that they have a queen, and she becomes their main focus. They smell her pheromones and make a connection with her. If we just turned her loose in there, the other bees might not accept her, swarming her and killing as they believe she could be an intruder.

Before we add any queens, though, we have to prepare the hives, and split them. Each hive will already have a queen in it, and since we can't have two queens in a hive, we need to know where she is. To do this, we remove all the bees from the top box, brushing or shaking them off the frames, into the bottom box. If the queen is among them, she will also then be removed into the bottom box. Ideally we do this in the heat of the day, while the foraging bees are out working. Once the bees are all in the bottom box, we take some frames with brood out and move them into the top box. This will make the nurse bees want to be up there with them. We put in a 'queen excluder' -- a screen that allows the bees to go through but not the larger queen -- so that when we go to take that box off in 24 hours, there is a group of nurse bees, larva and eggs, all up there. That will be the basis of the new hive. We remove that box, set it up as the base unit on a new hive, drop in the queen, and we have our split complete.

Sounds easy, right? It probably would be, but then again, you have to remember we are dealing with some -- okay, millions of -- very protective, very determined little ladies here. We also have to check the hives before we do anything. We need to make sure they haven't started creating queen cells on their own -- a sign that they were getting ready to swarm. If they have, we may be able to use one of their own queens to start yet another hive. We don't want to add a queen to any new queen cells that are about to open. We also want to make sure the hive is healthy; there is no point dropping a new queen into a hive that is not going to survive. These are queens from Hawaii. They don't come cheap.

When the splits are complete, we need to provide for the bees in the new hives for a few days. If we didn't, without foraging bees (because they would fly back to their original hive), the nurse bees would have nothing to live on, so syrup is a requirement at this point. When we did the splits, we also gave them some capped honey and pollen on the frames from the old hives, so they will be fine for a couple days while they all adjust and new bees hatch. Those new bees will soon be able to forage and the hive will thrive. We then will load up those new hives and take them to a new location; we will do this because these new hives will be a bit weaker and if conditions change, they could be overpowered by stronger bees from the original hives coming in and stealing from them. Our hives will be heading north about half an hour, where they will be able to help pollinate some fruit trees. Moving them also should mean that if something happens to harm the hives here again this year, as happened last year, we still have some bees to build from.

The bees that stay here will be unaffected by the change. They currently have plums, peaches, crabapples, pears, nectarines and apples all in bloom. The dandelions are out in abundance. The flowers are breaking through in the garden, and the holly trees are, apparently, abuzz with bees as they start to bloom. We have lots of drone cells in our hives, and they are all in good shape. The bee year is well underway. Hopefully these are the first of many splits over the next few months, and we will see lots of honey in the fall.

Posted by The Great Hair Migration at 3:10 PM