It’s been almost a full year! How did that happen? Our last blog was about the Flow Hive, and we start this season off with, yes, you guessed it, a real Flow Hive of our own. It's only one of the new developments from the last 12 months, and to be honest, we are more than ready to leave 2015 behind and start 2016 with a bang. We can’t wait to get our Flow Hive out there and full of bees, and we can't wait to include updates about the hive in our blog, so come on, Spring! Time’s a-wasting.

2015 was busy in many ways for us (which is why we never did any blogs). It was also, to say the least, a bit disappointing from the beekeeping perspective. The year started off wonderfully, with all our hives coming through the winter with flying colors. We were thrilled to see all those bees in all those boxes. The Queens seemed strong, the hives were busy and everything seemed wonderful in our little bee world. We set a couple of hives in a new yard (thankfully) and prepared for a year of growth, success, and lots of honey. Unfortunately, the best laid plans of mice and men...

Though we started off strong with all our hives, and we added three new package hives from New Zealand, and three new local nucs to the mix, we ended up the year with one less hive than when we started. These were definitely not the results we had hoped for, but it was better than it could have been. The new packages started off well enough and grew steadily enough, that we purchased more boxes, more equipment and, thankfully, a new motorized extractor that didn’t have to be hand-cranked! Soon into the spring, though, our bees faltered. The new hives didn’t grow. The queens were laying in spotty patterns – not a good sign. We found hives with dozens of new emergency Queen cells, indicating that the hive was in a panic to create a new queen -- the current one was either sick or dead. We had many bees dying, their tongues protruding as if they were poisoned. In fact, we assumed that they must have gotten into a sprayed crop and brought the poison back with them, but the symptoms didn’t seem quite right. It was the start of a massive learning curve for us, as new beekeepers.

We had the provincial Bee Inspector come around and he went through all our hives. The idea of it being Foul Brood was mentioned then ruled out (thank god, because the thought of burning our hives completely - the only treatment for the disease - was heart-breaking). Mites were also considered and tested for, but were ruled out. Samples were sent off to be tested, but the results were inconclusive. Through this, more of the hives faltered. We would split some because of massive queen production then find all queens had perished. It was a year of many challenges, and not much good news to share with anyone.

Add to this the fact that we had a very dry year, not conducive to flowers blooming or plants growing well, and not really something that makes already-stressed bees happy. The bees were always looking for water, finding it too often in the swimming pool where they then became trapped. The drought also meant an increase in wasps, too many of which had a taste for new bee brood. We lost three hives completely to wasps – they came in, killed the already-struggling bees and robbed the brood.

As we learn in life, though, failure begets knowledge. We learned many things over the course of the year. Among those things learned was that it was not a very good year for beekeepers in general around the continent. It was not a fact to celebrate, but it did reassure us that perhaps we weren’t the cause of our hives dying. We learned that spring in the apiary business means increased sensitivity to stings. We learned that in dry years, the honey will be less abundant but thicker in composition (thank god for the motorized extractor!). We have had the ultimate crash course on just about every disease known to bees, and every threat, and how to try to mitigate the damage they can cause. We tried a different treatment program (still organic) for the treatment of mites when we put the hives to bed for the winter. We will be trying some new techniques in the spring when the hives get ready to swarm, hopefully resulting in more hives for us in the end. 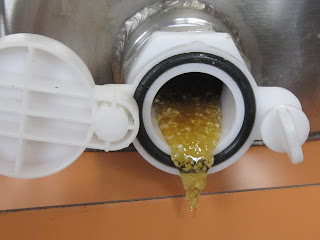 Mostly what we learned, though, is that we love being beekeepers, despite the challenges (and man, were there challenges in 2015!). Our first inspection this year went very well. The bees were in good clusters, and the hives we were sure would not last the winter seem to be going strong. We have put out feedings for them – another new recipe, as well as the pollen patties – and we are watching as they emerge on those first spring flights; they have waited a long time to go to the bathroom. It feels to be an early spring, with a new year of possibilities and potential (and hopefully a few less stings than last year, although we also learned some new, amazing tricks to deal with that as well). We have our new signs to up – hanging out our shingle, as it were – we have some new ideas and plans for our bees and their honey, and we’re ready to face 2016 head on.
Posted by The Great Hair Migration at 9:36 PM No comments: