We Couldn't Beelieve it!

Day 15. Time to check our little buddies, and they did not disappoint.

We did Team Tangerine first. The hive has 8 frames in it currently, and a frame feeder -- a box that holds syrup for the bees to eat when the plants aren't blooming yet. It was wonderful to see that they had comb built in the first four frames. There were cells of pollen, cells that were capped for syrup, cells that had eggs, some with larvae and some that were capped with the larvae inside so they could finish growing. It takes 21 days from the time the egg is laid until a noo-bee comes out of the cell. We will be having a LOT of noobs soon.

The Mellow Yellows have always been the more precocious of the hives. They were livelier and hungrier, and they are still a bit ahead of the Tangerines. They are up to five frames of comb now, and they had created a burr comb at the top. That was our fault -- we had put the inside cover on upside down last time, so we created a space. Bees in a hive believe, apparently, that space is not to be wasted. They had gone through most of their syrup and their protein pad.

We wanted to take pictures of the bees, but some of us are still not brave enough to work right there with the bees without suiting up (yes, that would be me) but with the marvel of new age photography (not really, it's been around for a while but to my parents it would have been new age) we were able to get some pretty incredible pictures of the bees. Considering that they were all taken from at least 10 feet away, we are not going to complain about the quality. This frame on the left is from the second hive (Mellow Yellows) and was the third frame in from the feeder, so this one was pretty much smack in the middle of the box. It has a bit of everything going on. 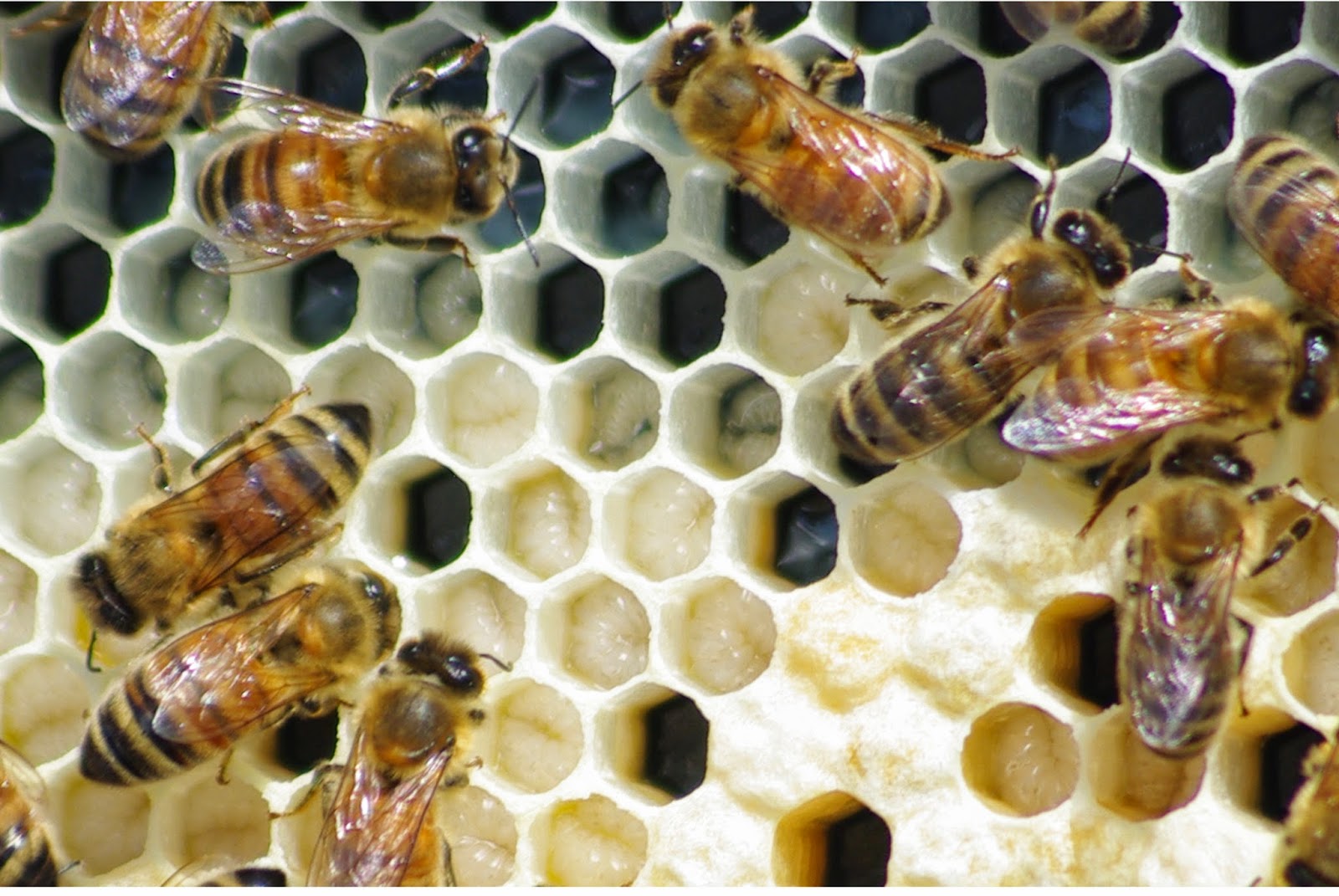 This is a close-up of it. You can see the larvae at different sizes, the bees tending them, some capping the cells, some adding food for the babies to grow. There are some here you can see with eggs in them as well. We had one frame where there were dozens of new eggs.

To explain a little, the bees create the wax comb. Other bees bring in pollen from the plants and it is stored around the area where the eggs will be laid. This is so that the food is handy for the bees tending the babies. There are some cells that are capped white. Those are full of syrup that is being stored. We're hoping they are doing that because of the cooler weather we've had. The queen will lay an egg in a cell that has some royal jelly in it. They other bees will tend the egg until the larvae stage, then cap the larvae. When it becomes a bee, it will emerge from the comb and start work. 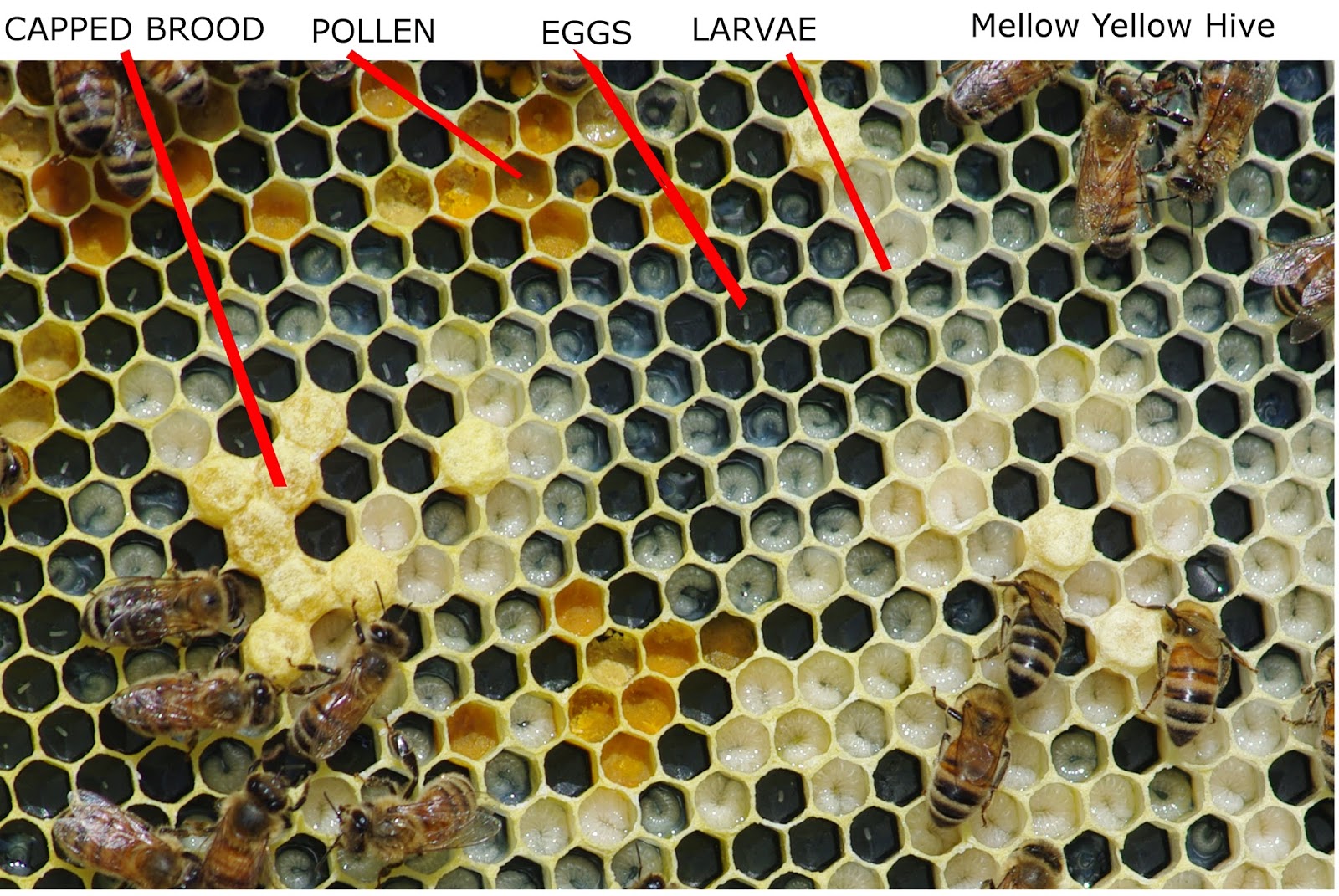 We'll leave them to work for another week. They are surrounded by plum and apricot trees that are coming into bloom. The magnolias and forsythias are blooming as well, and we have daffodils, hyacinth, and tulips everywhere, so they should be happy bees for a while. We'll know better next week, when we see if the larvae have grown into real bees.
Posted by The Great Hair Migration at 2:26 PM No comments:

May the Force Bee With Us!

We've talked about it for years... many years. When we bought the acreage, it was discussed again... It would be cool to have bee hives. It was talked about, but that was it. Last summer, though, things changed. While working outside, the drone of a thousand bees chased us into the house. We watched as the cloud -- probably closer to 60,000 in number, crossed our yard and landed on our fence. It was May, and the bees were looking for a home. An hour later, they were gone, still in search of their own little piece of soil.

It piqued our curiosity... so it was time to learn more about these little critters if we were, willingly or not so much, going to share our space with them. We read, we googled, we YouTubed, we talked, we forumed, we met with associations... and finally last week, we became apiarists. Even the government has bestowed their blessings upon us, so it must be real. 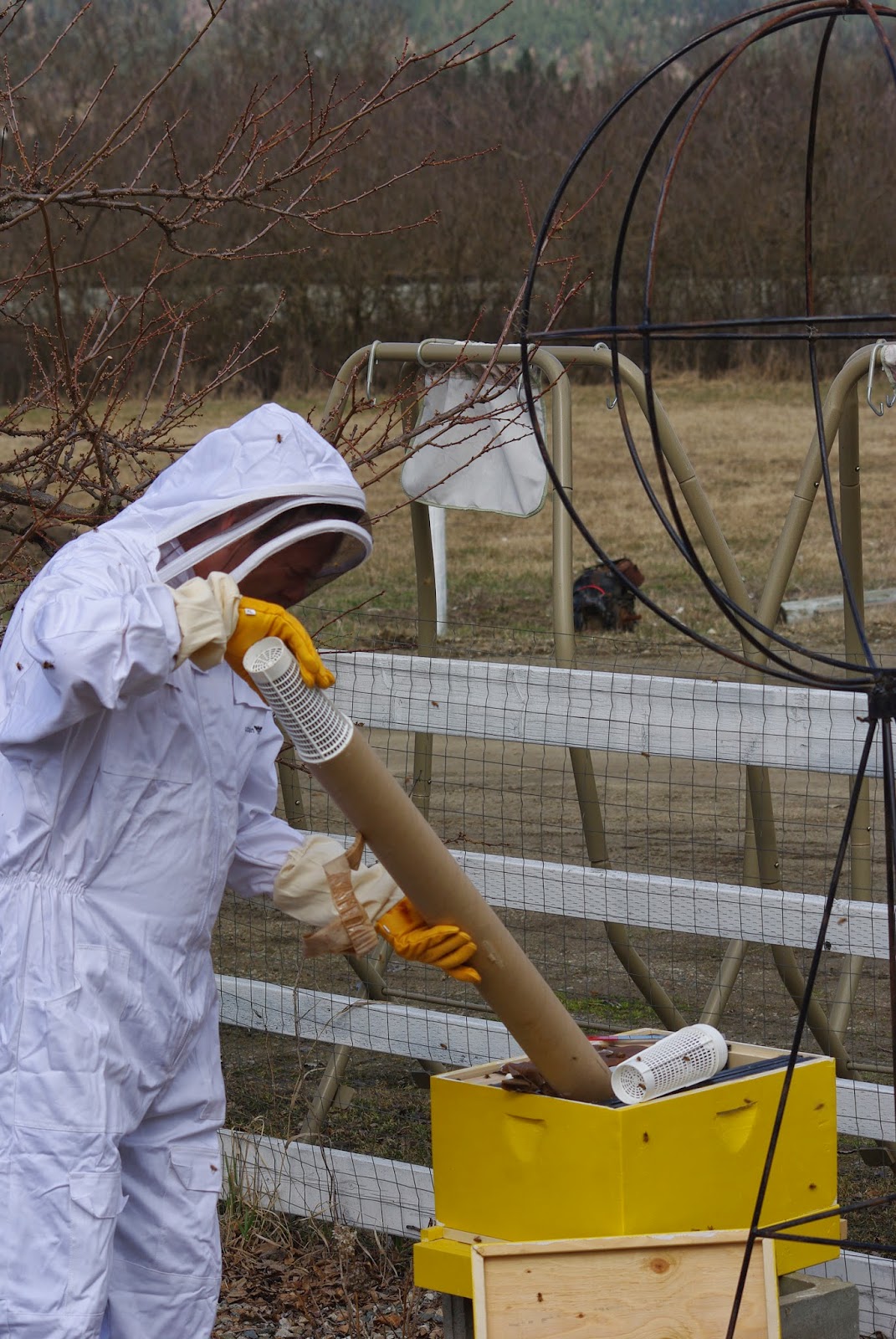 In Canada, you get bees from New Zealand. It's the only place we are allowed to get them, and they come in cardboard tubes with little nets on the end. Jet lagged, and probably suffering from more than just a little bit of culture shock, going from warm fall to cool spring, we put the bees into their new homes.

As you can see from the picture, while winter is gone, spring is taking it's time arriving, so we needed to create food for them so they could start their work. The end of the tube was opened, and a long piece of screen that was attached to the end was pulled out. In the middle of the string of screen was a box -- the queen cage -- which we unplugged, then replugged with a marshmallow. Some of the bees chew through the marshmallow to free her, while the rest set up home. It's simply a means of keeping her there long enough for the rest to like their new digs, and to give them time to set up house. Then the rest of the bees get dropped in from the tube, the cover goes on, and we wait... and hope that things are going okay inside.

Over the course of the week we watched as they cleaned out any of the bees that didn't survive the trip. There were only a few in each of the hives, but bees are neat freaks, and they clean out all the garbage right away. We also saw them coming back from their flights with their legs loaded yellow with pollen. A queen wasp showed up for a visit, testing the resolve of our bees... they prevailed and the wasp was denied entry. It would take one heck of a brave wasp to try to breach the walls of those two fortresses, but in the heat of the summer, it can happen... and happen quickly. 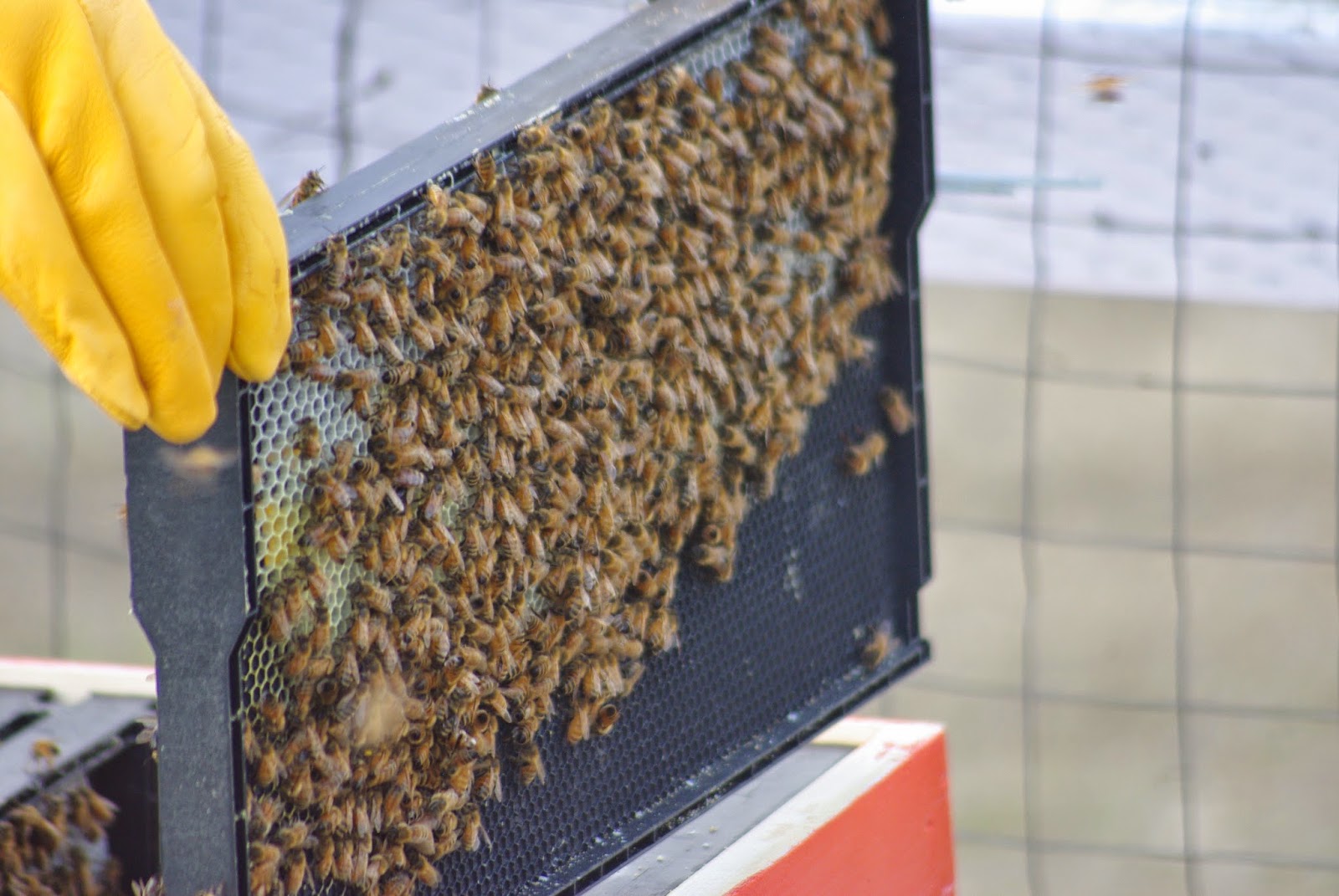 After a week of watching, and wondering, we opened the hives to see what they were doing, and if they were happy. Judging from the results, and the amount of honeycomb already created by them, it seems they like it here just fine. They are not aggressive, and despite being noobies, there have been no stings or other ugly incidents (although we do keep the epipen handy). They have been drinking the syrup and eating the protein mat... and they have definitely been busy. We did keep the smoker handy, but it wasn't needed. Now that the flowers are blooming, they should be much happier. 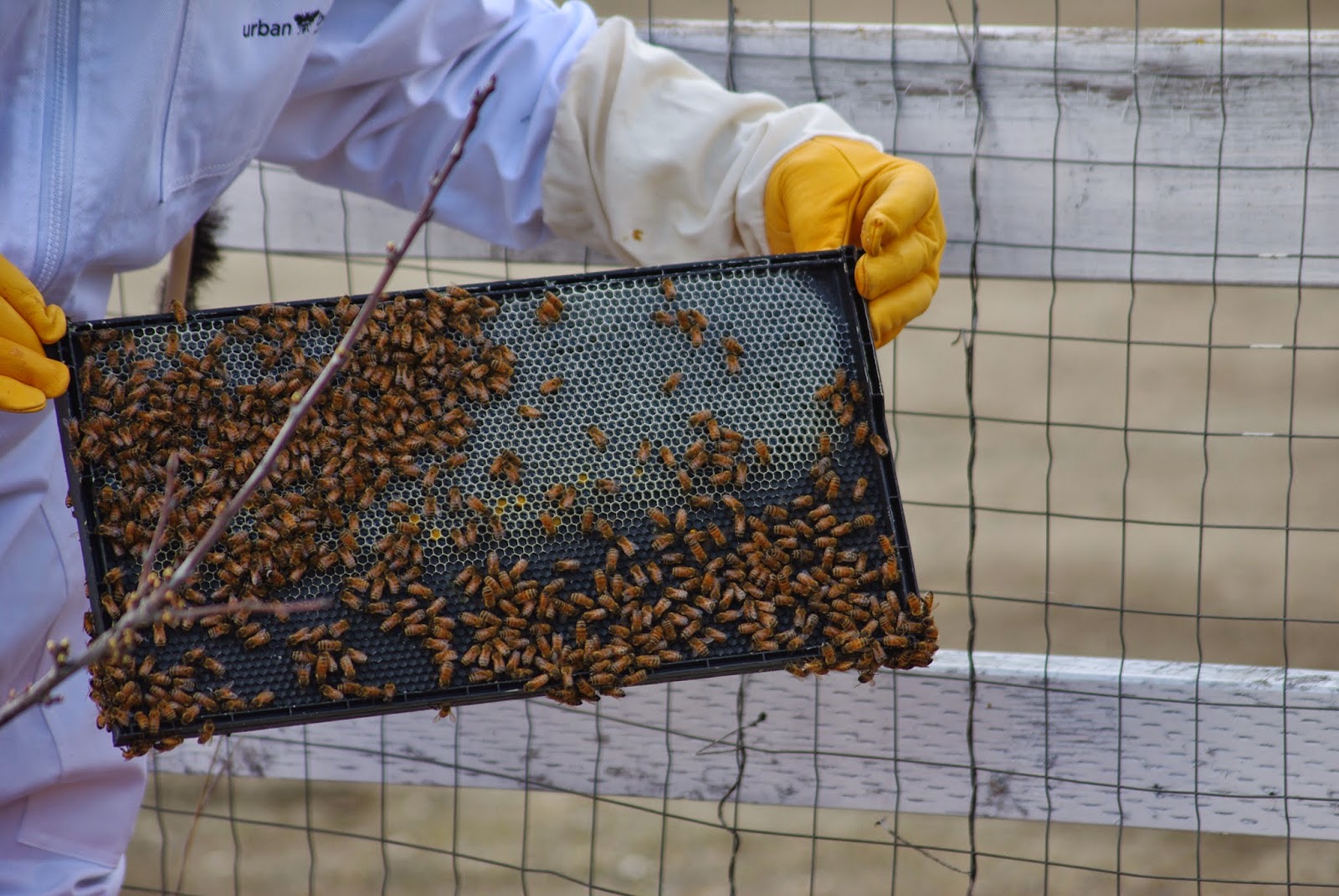 We will be sharing this journey with you... as we get our two new hives next month, move the existing hives to their new location, and undoubtedly make some typical noobie errors. We'll also share some bee trivia tidbits with you, because they are really incredibly interesting little critters. We're looking forward to the journey though, and many years of learning, and enjoying, these amazing and necessary gifts of nature.

May the Force bee with us!!
Posted by The Great Hair Migration at 1:57 PM 1 comment: