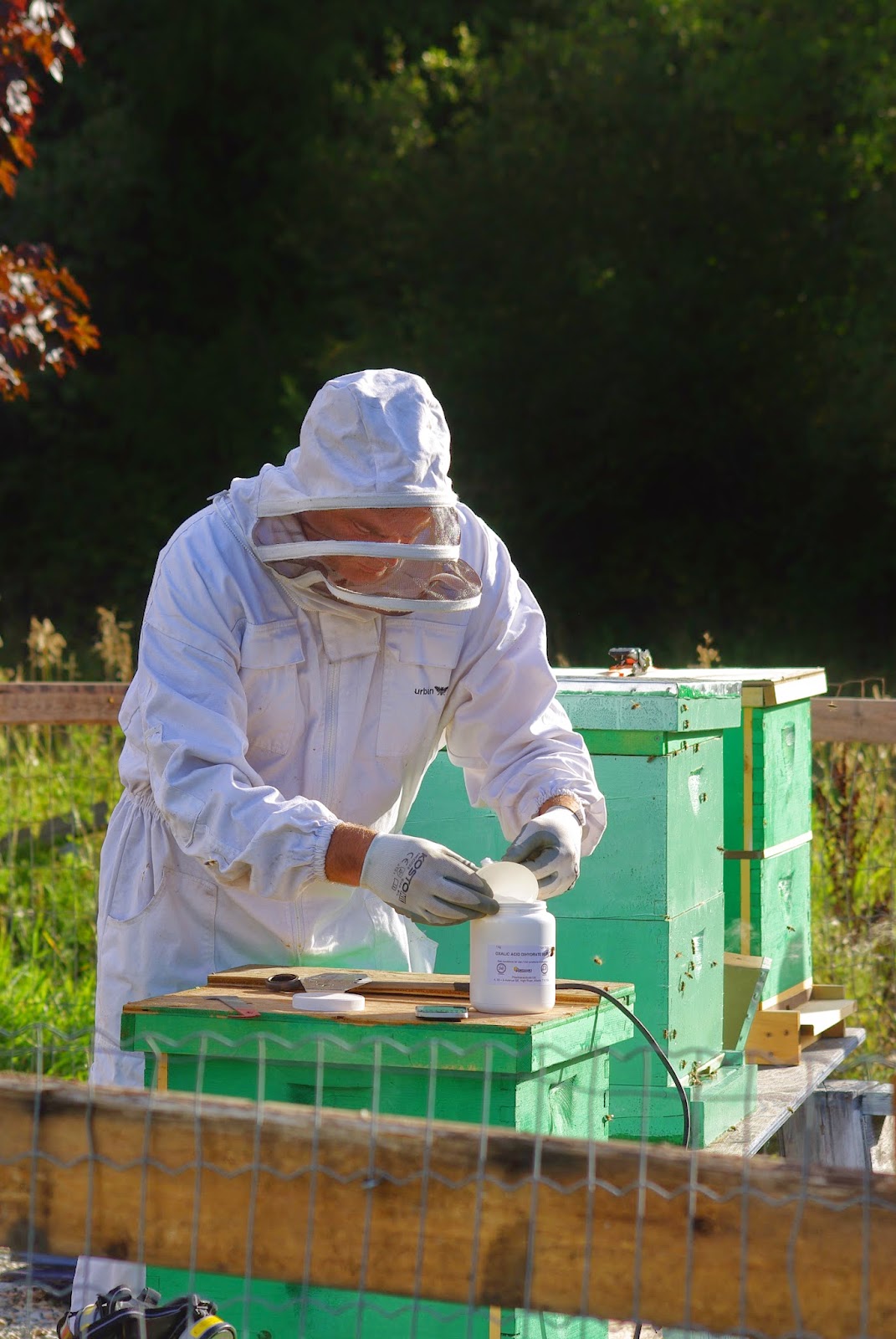 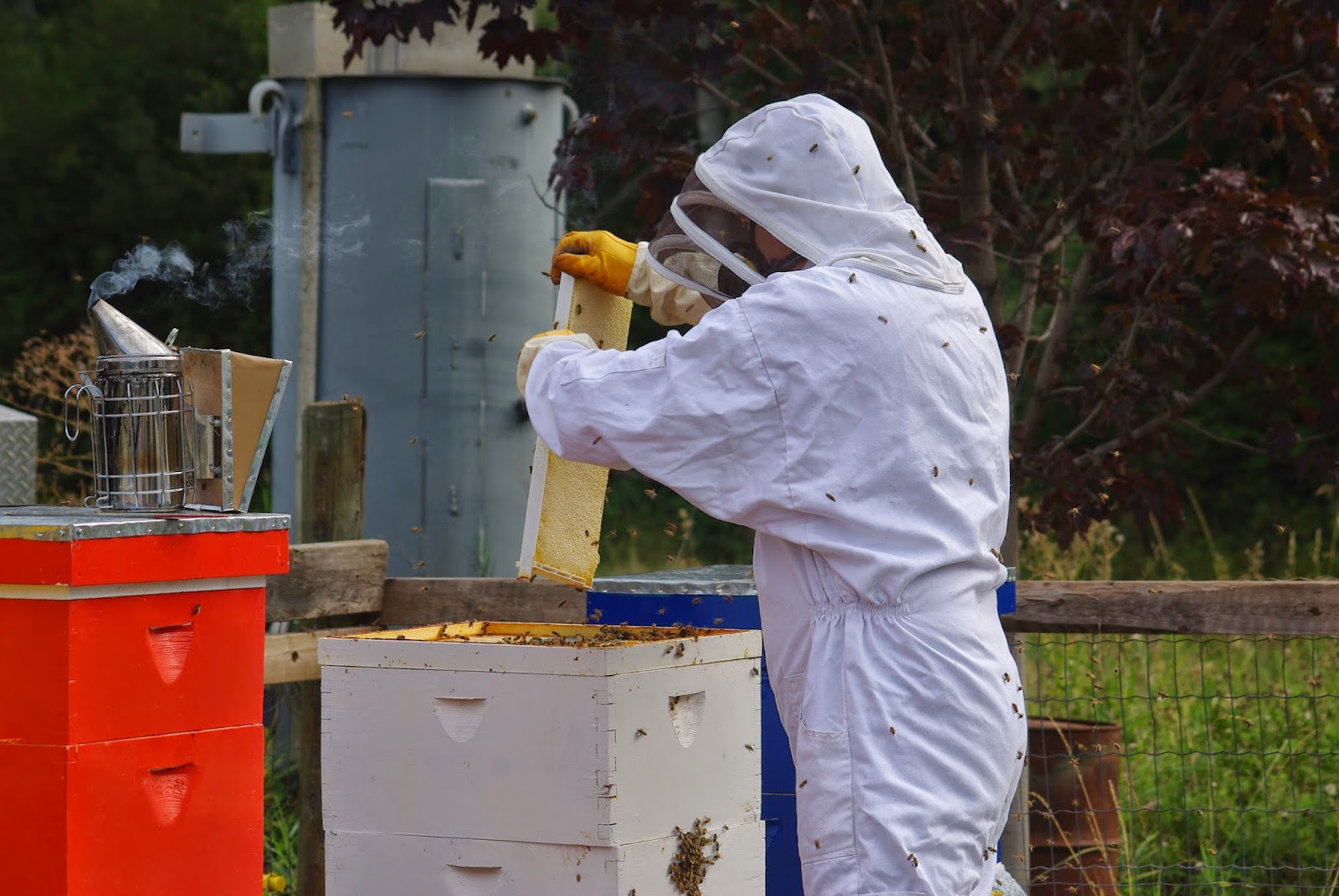 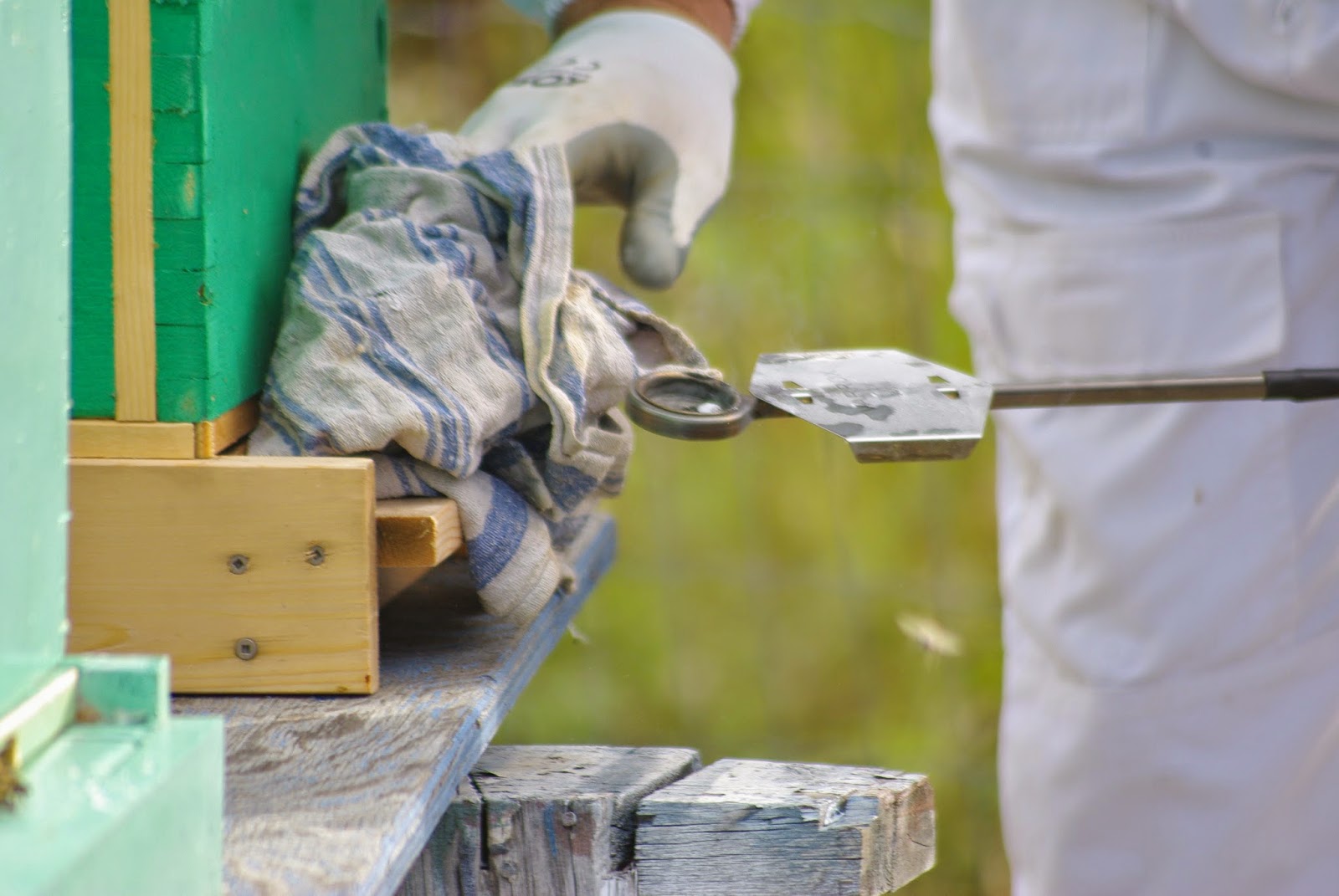 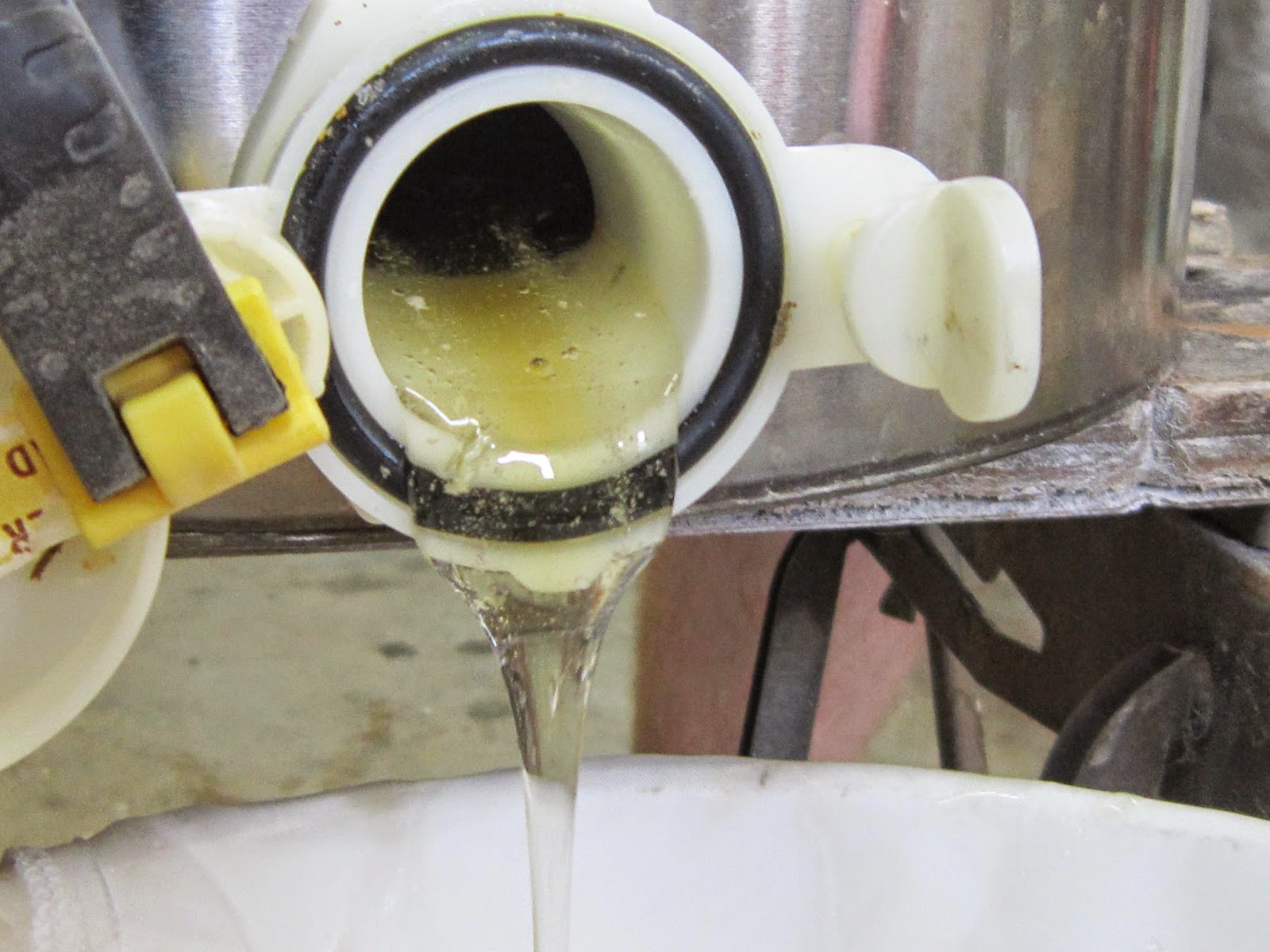 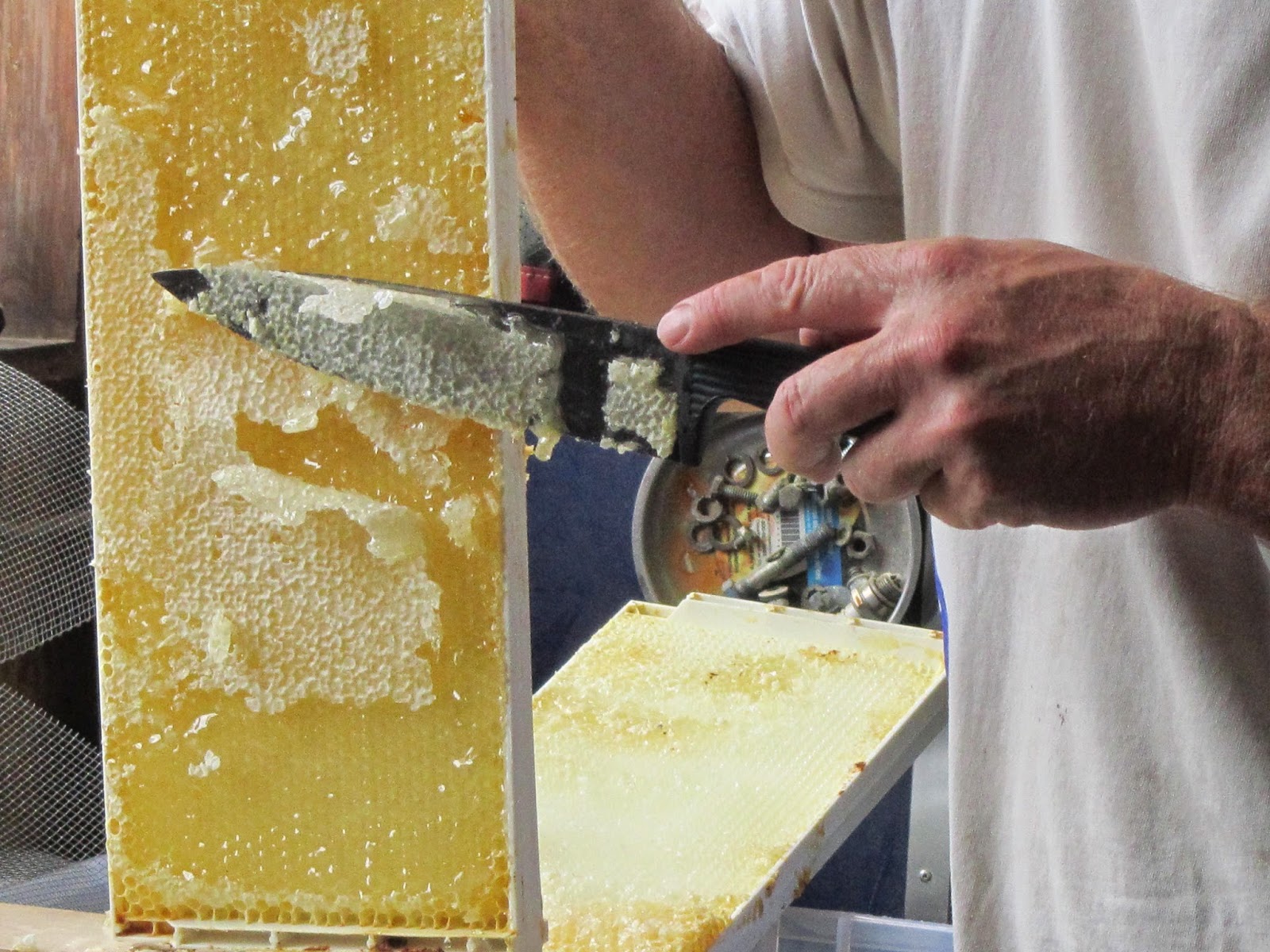 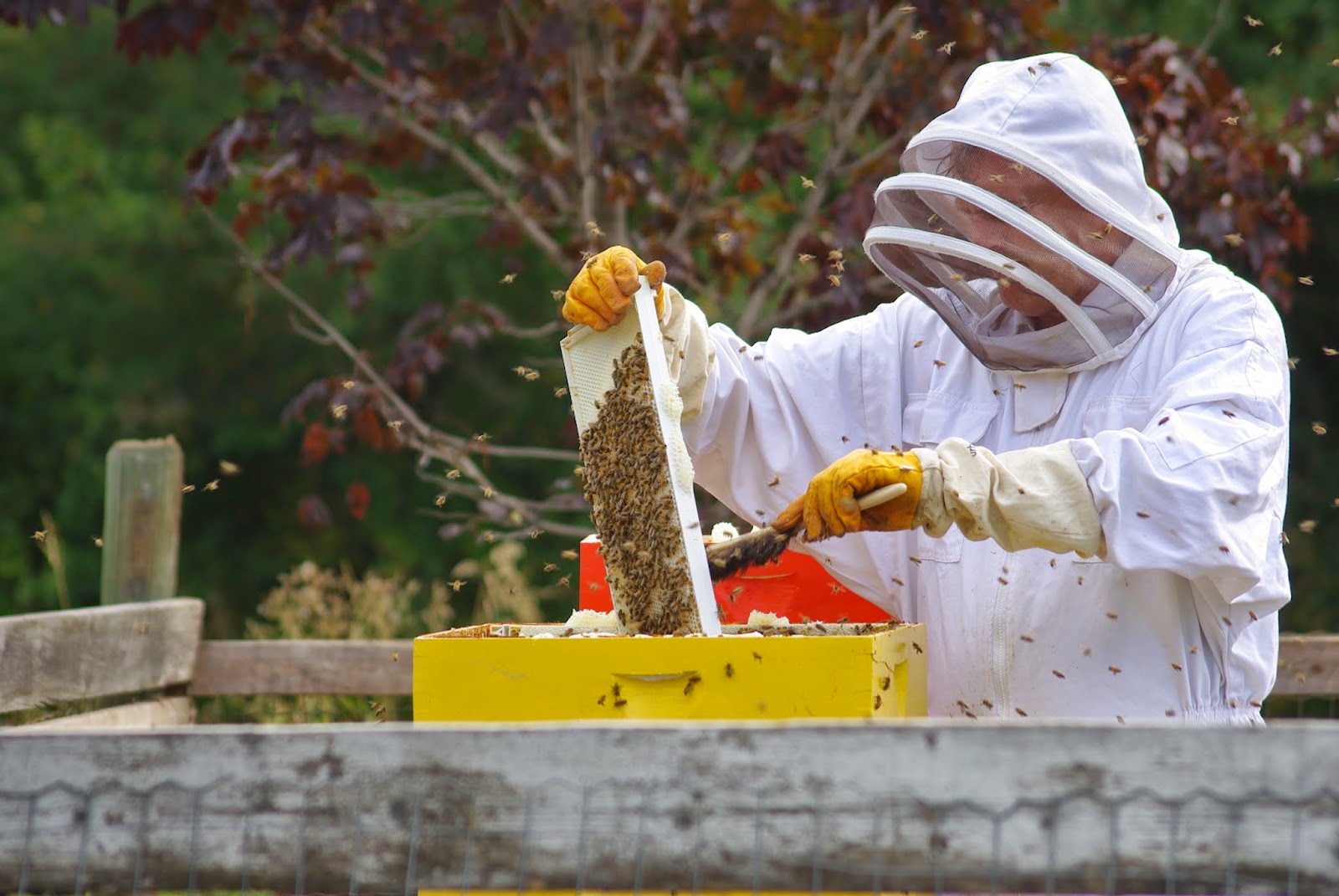 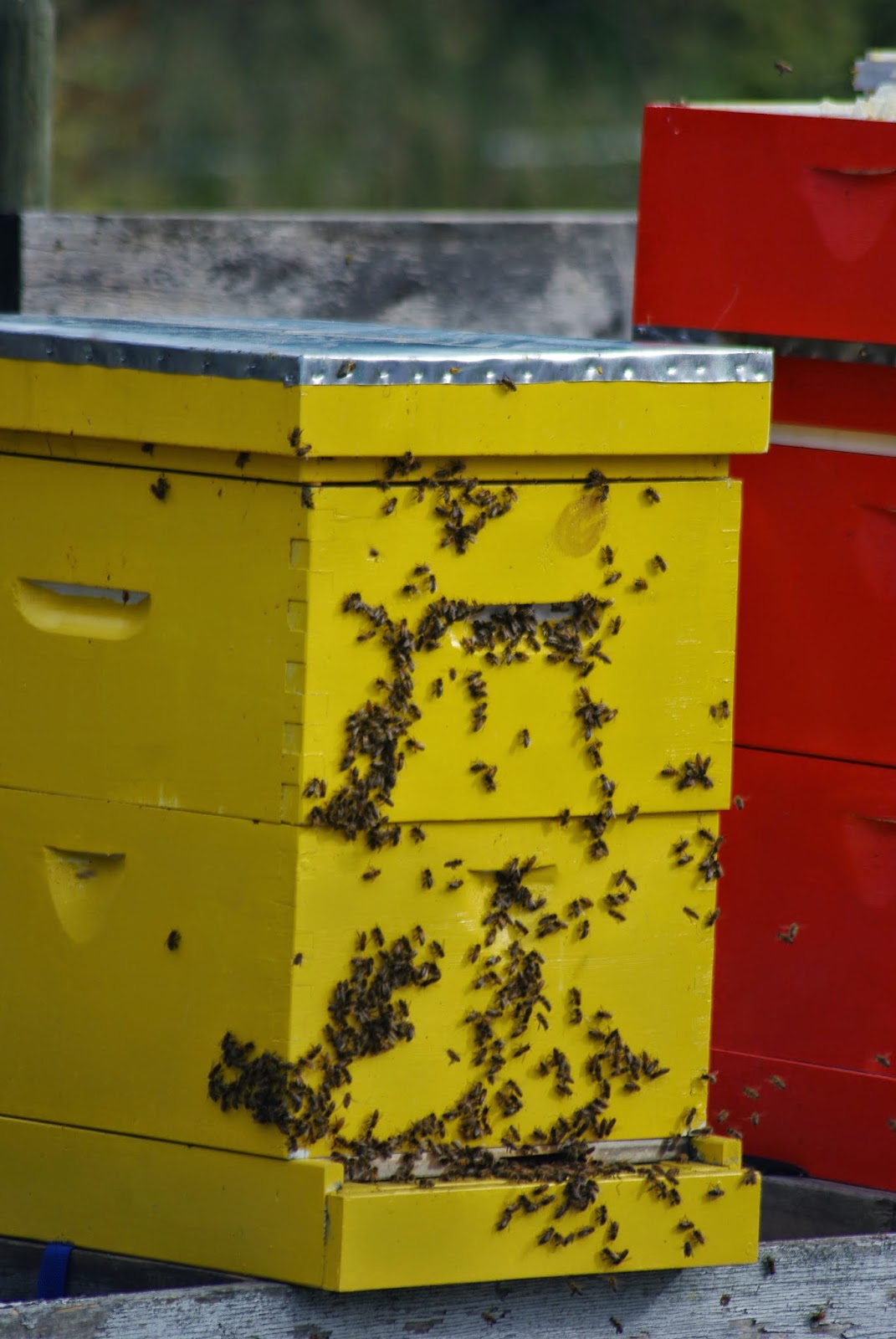 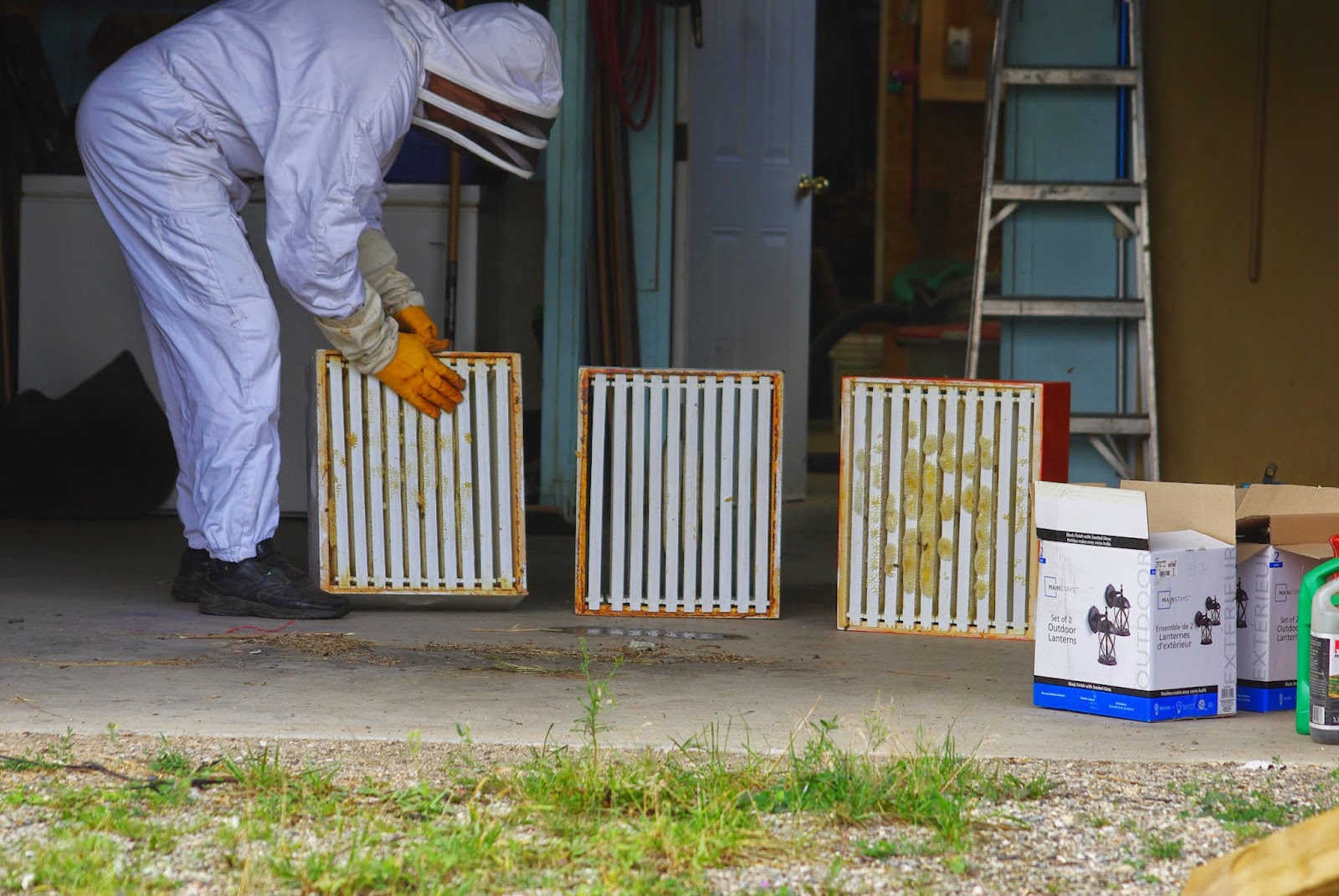 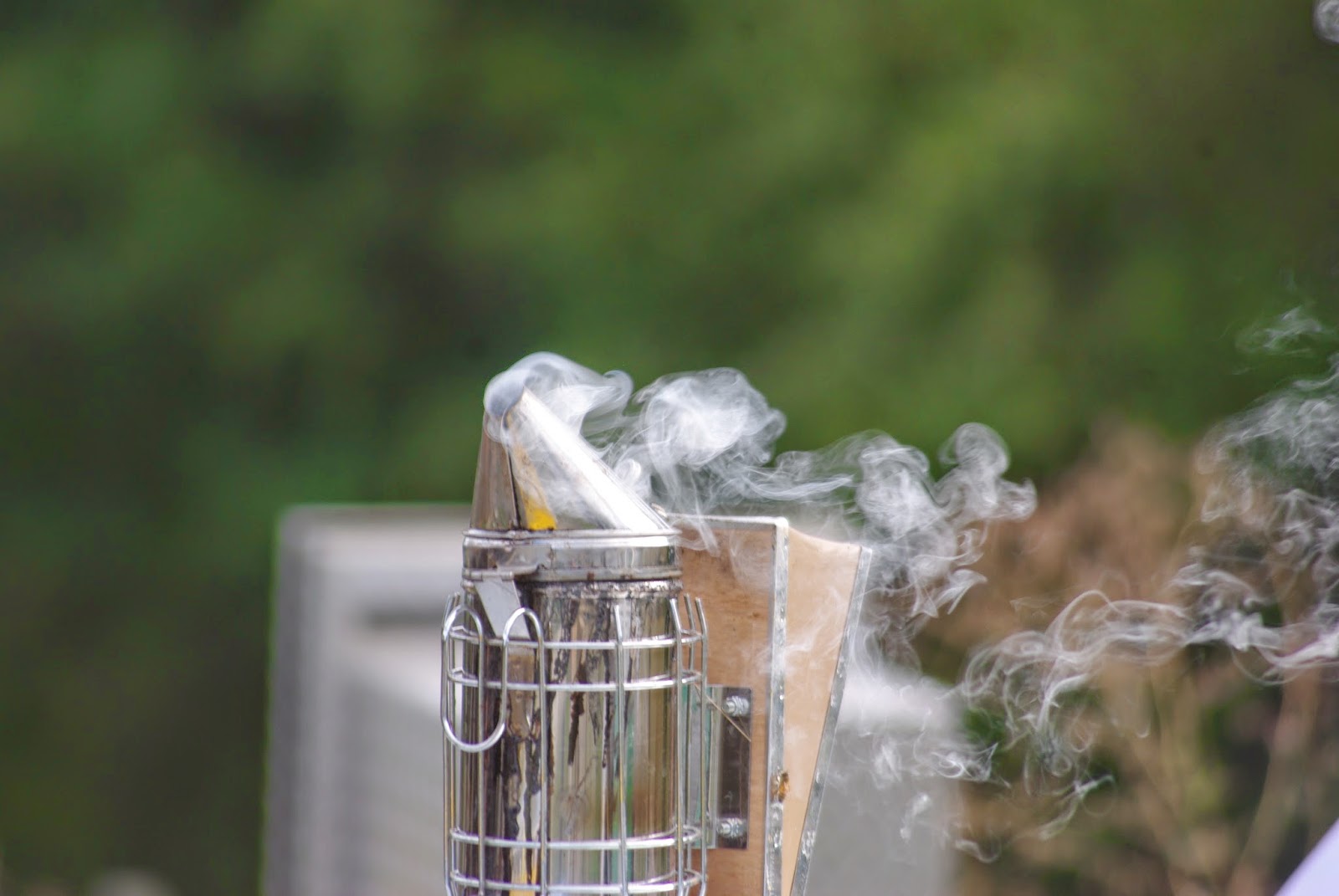 Posted by The Great Hair Migration at 7:47 PM No comments: 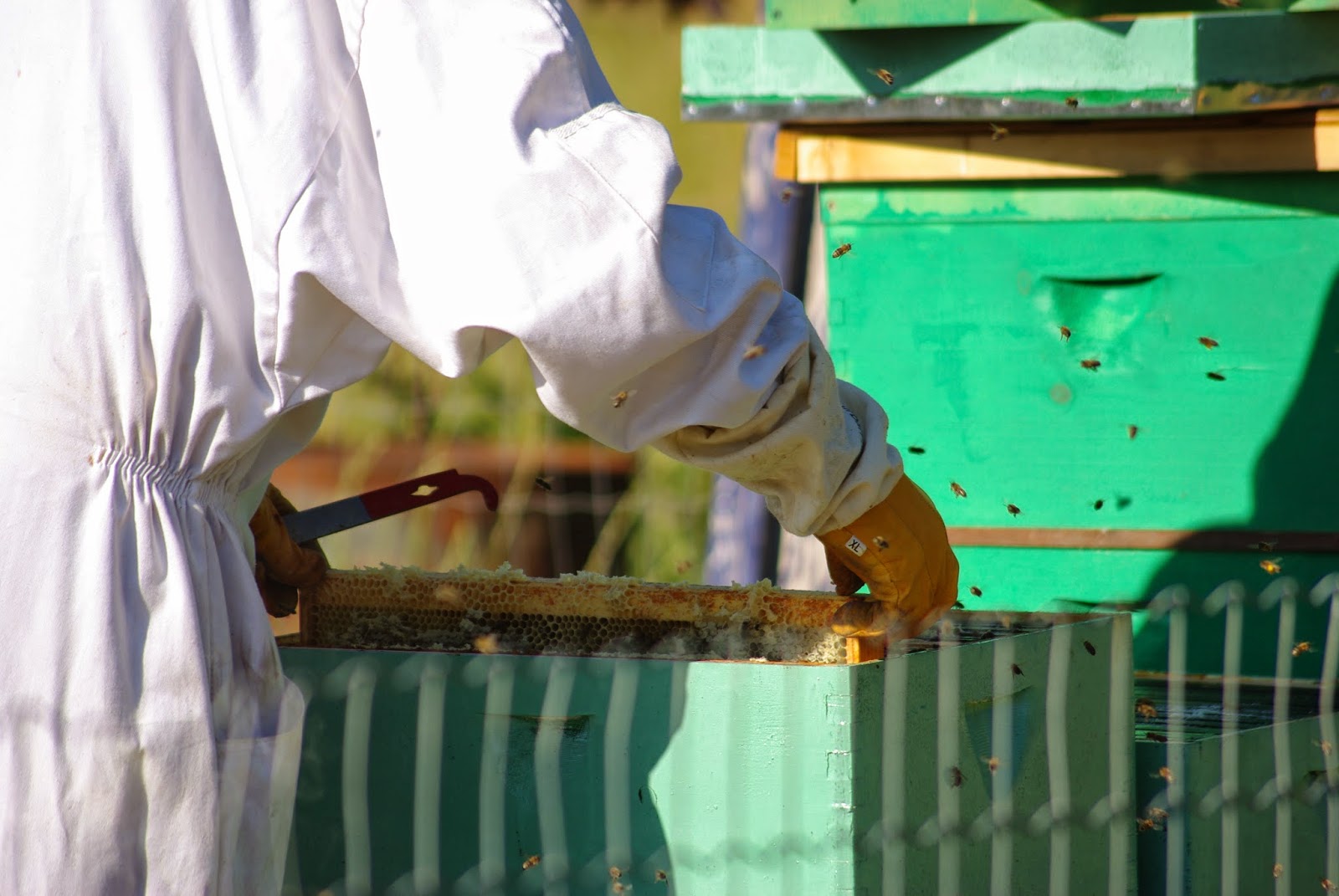 Wow, we have a lot of catching up to do! It’s been hot and while a number of beekeepers are saying their hives are slowing down and they are supplementing food, we are still doing okay. There are a lot of alfalfa fields around us in bloom now, and apparently bees like sunflowers, and we have a LOT of them. The other thing we have, though, is a bear nosing around, so we’re getting ready to deal with that. For now, we have a radio (talk radio station) playing all night to keep him hopefully away. There are a lot of berries and a ton of fruit on the trees so hopefully he likes that better. It would certainly be easier for him to eat. 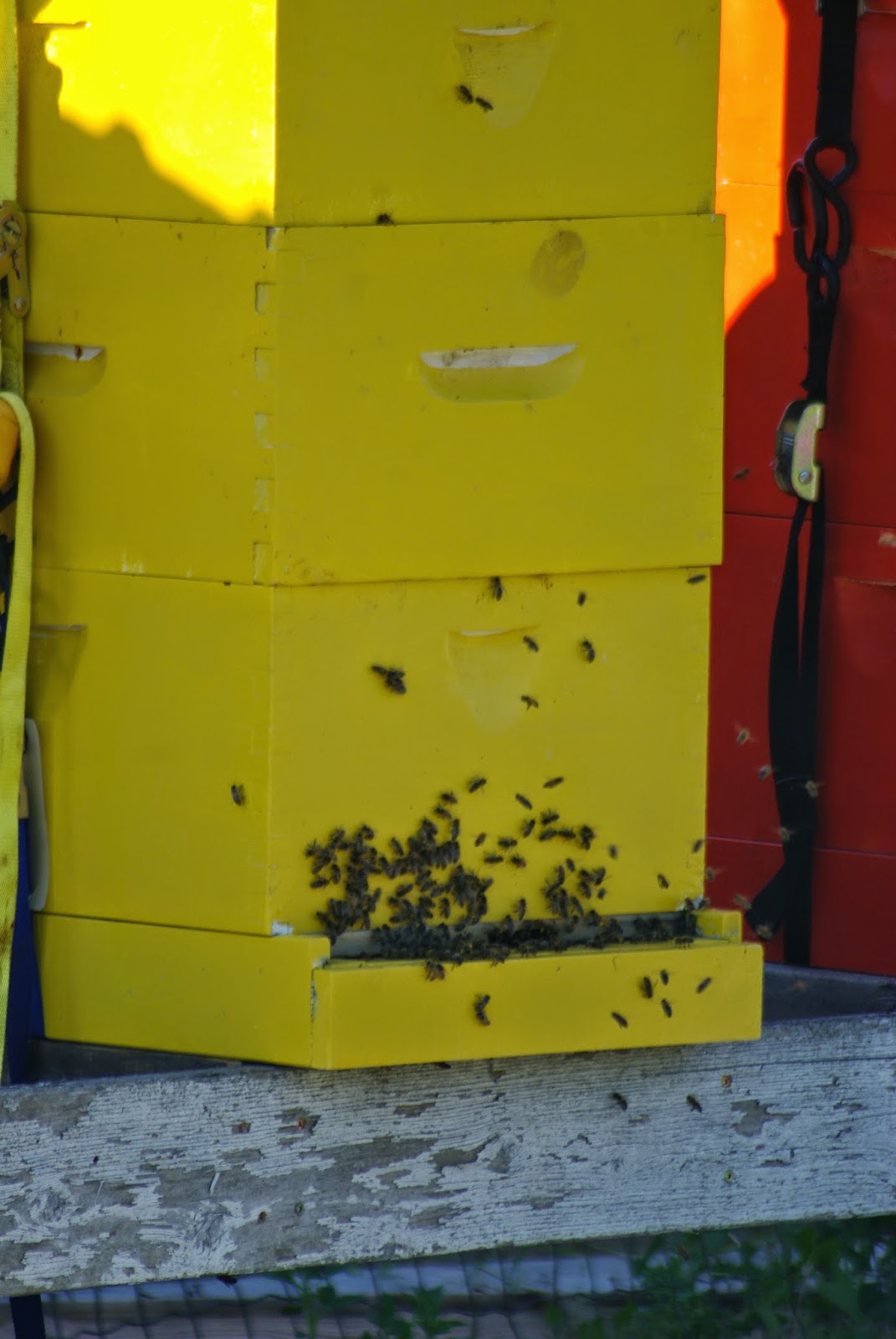 Last week we found that Gang Green had only one frame empty, and they were laying lots of babies, so we added a second box to their hive this week. We removed a lot of burr comb at the top and swapped a couple of frames from the bottom to the new top box to encourage them to move up. We shimmed the lid to give them a bit more air movement in the heat, and we will now see how they do. Considering how late the hive was started, we aren’t going to complain.

Pistachio had already made use of their second box, and had only the outside frames left to use. We swapped them to the middle, and this week we added their honey super box. In the intense heat we’ve been having, this is our only hive to beard – they collect in a huge pile stuck to the front of the hive... hanging there like a beard. We’ll try to get pics this week of it. 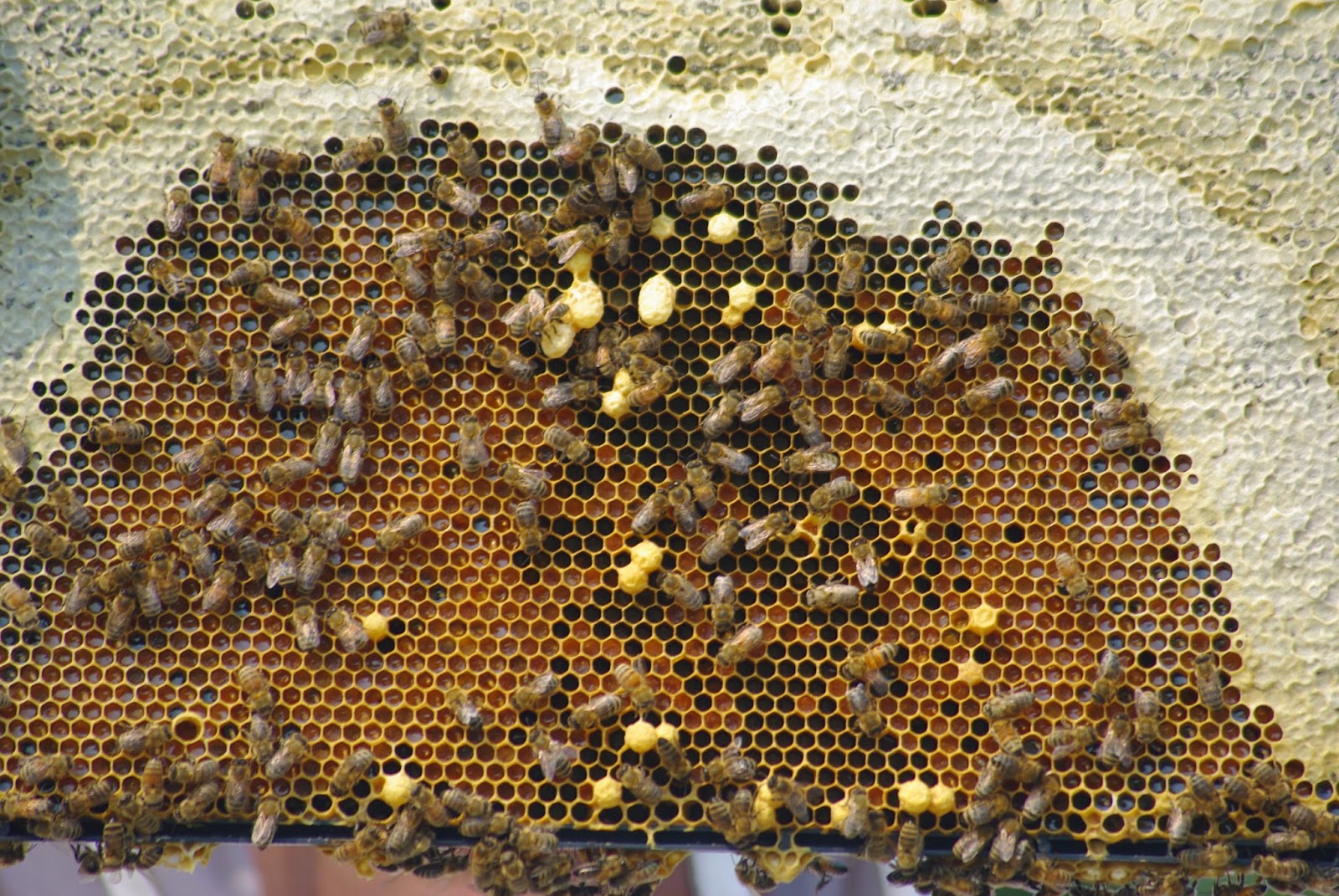 The Dregs... the poor poor dregs. Last week there was one frame with brood that we moved to the top box, and there was no other activity there. The bottom box had two frames of capped brood. Today we found queen cells on one frame in the bottom box. We also found one frame with a lot – A LOT – of drone cells. Obviously they need a new queen, so there has been no new brood, and there are a lot of empty frames. We changed to a smaller entrance way with them. 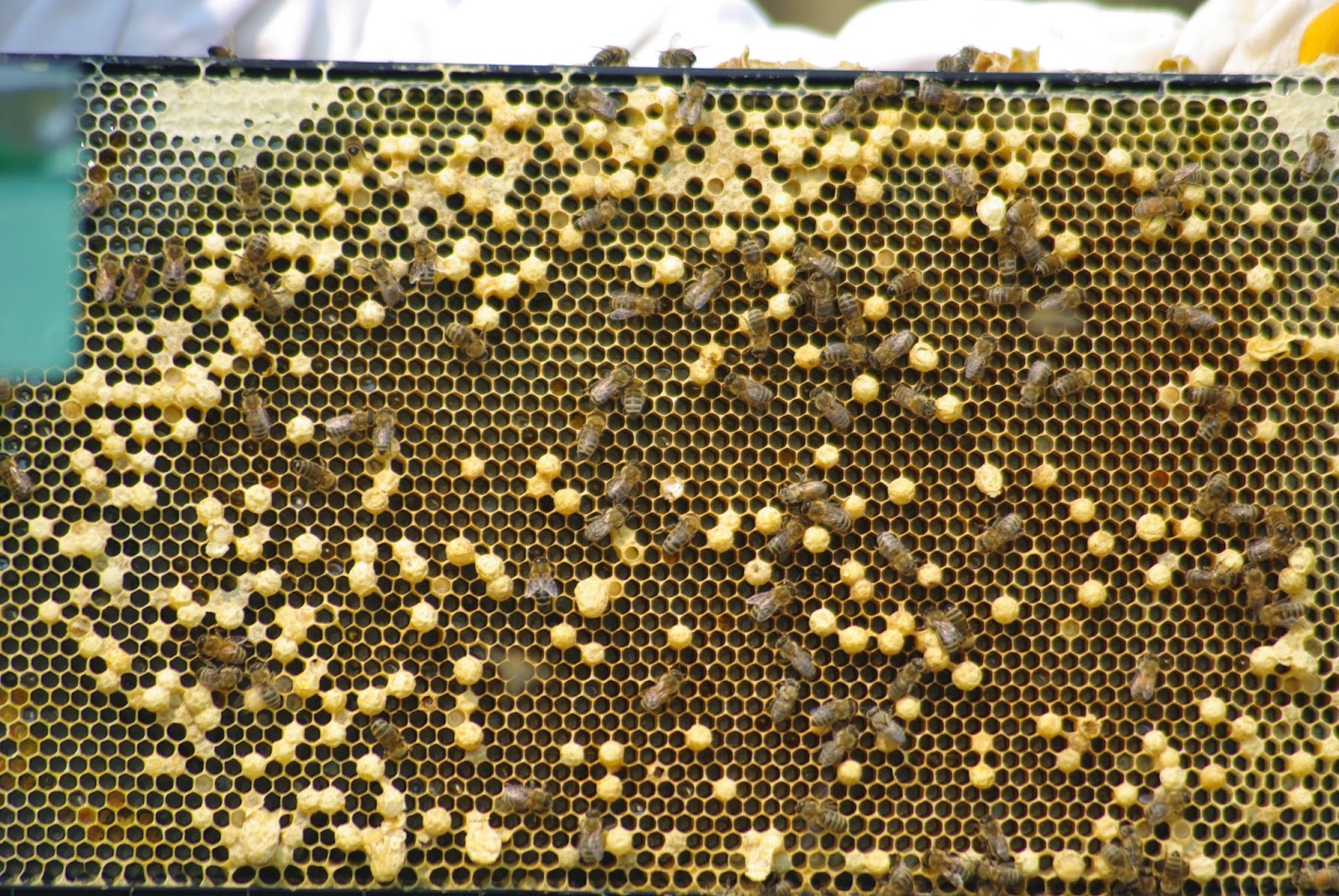 The Moody Blues have been busy bees. Last week they had filled all but one frame in their top box, not with brood but with honey. This week, because they were still at it, and because they had a ton of burr comb on top of the hive, we added a honey super for them. 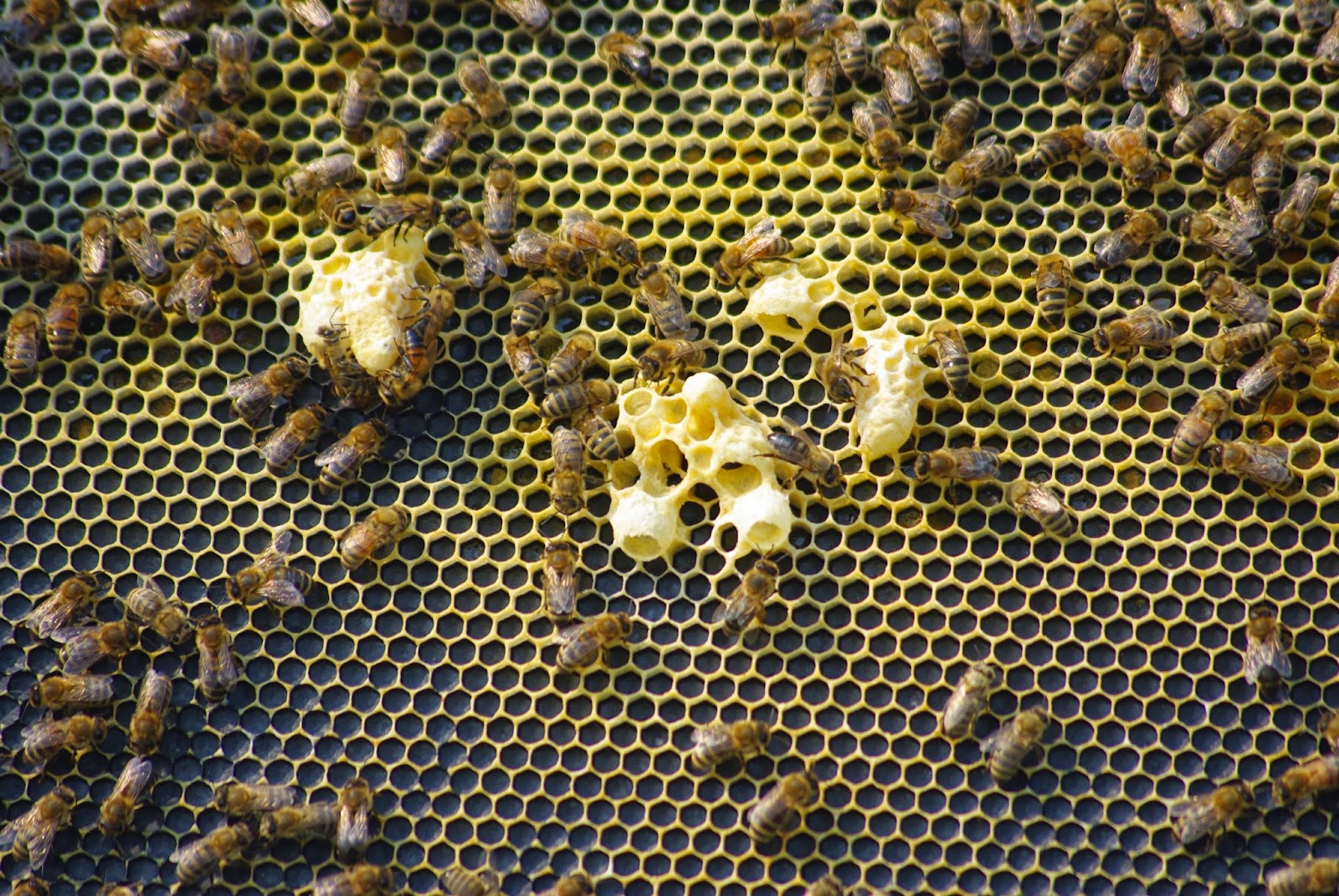 The White Outs last week had seven frames of honey in their honey super, although nothing was capped. Today, like the Moody Blues, they had a lot of burr comb, and they had the honey super just about full, so we added another honey super for them. When we added it, we put it under the first honey super, so they will be more inclined to go to it now.

Team Tangerine – well, everyone has that one that they worry about, and I guess that’s Team Tangerine for us. We had added a honey super already, but last week there was nothing in it. They had four frames of capped larvae in the second box though, so we were hopeful. Today we took a lot of burr comb from the top of the second box. We swapped out a drone frame for a regular frame. They had some capped and uncapped brood, so we moved the outer frames that hadn’t been used yet into the middle. If this hive survives the winter, we will probably be looking for a new Queen for it come spring. 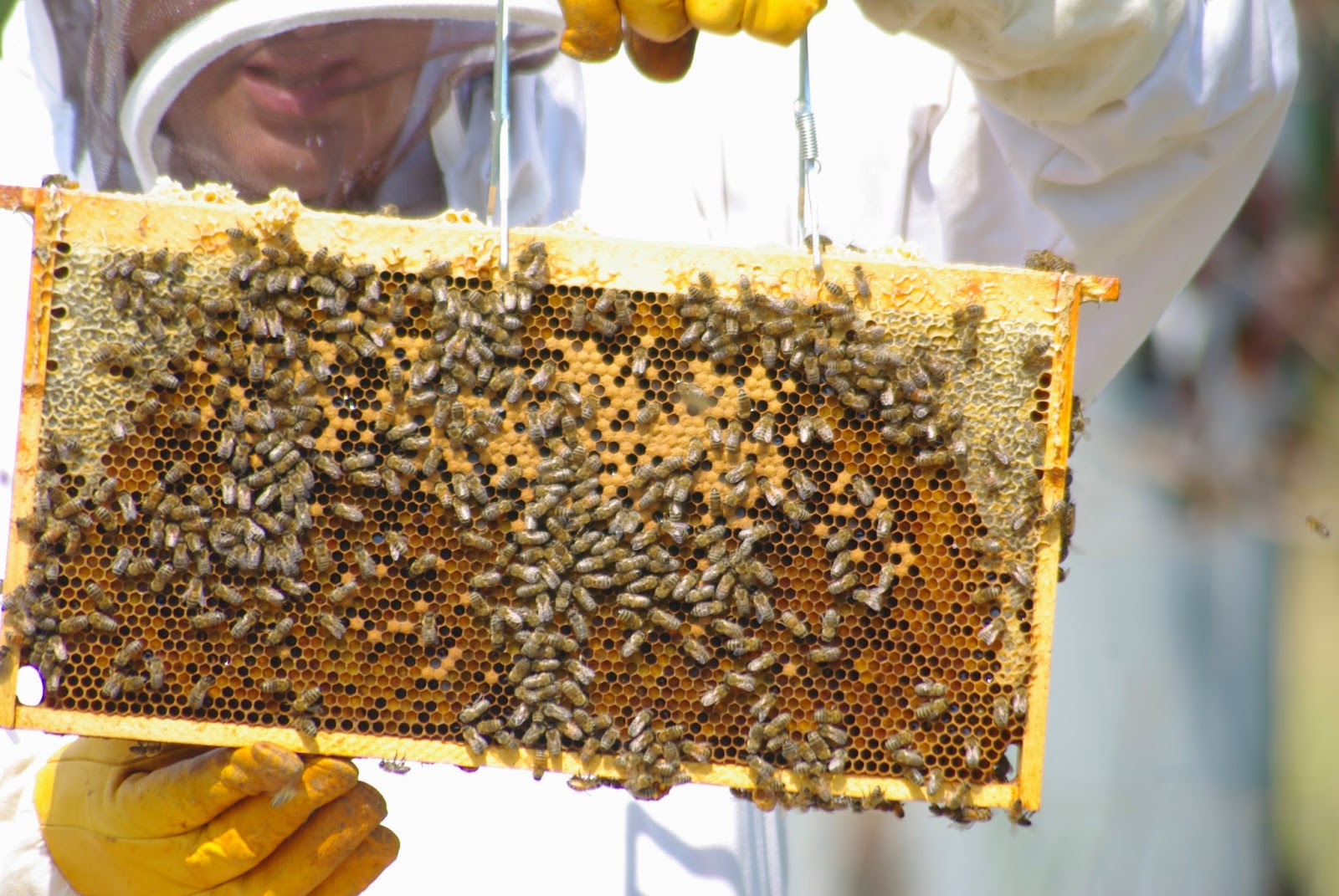 To end on a high note – really high.... high five, in fact – we added a third (yes, THIRD) Honey super to the Mellow Yellows. They are quite mellow, and gentle, for bees, but man, do they work! Last week the top honey super had 5 full frames of honey. The second honey super was full – it weighs over 30 pounds! – and we swapped the two supers around. Today, they had lots of burr comb that absolutely dripped with honey because they only had three frames left unused. Gotta love those Mellow Yellows! 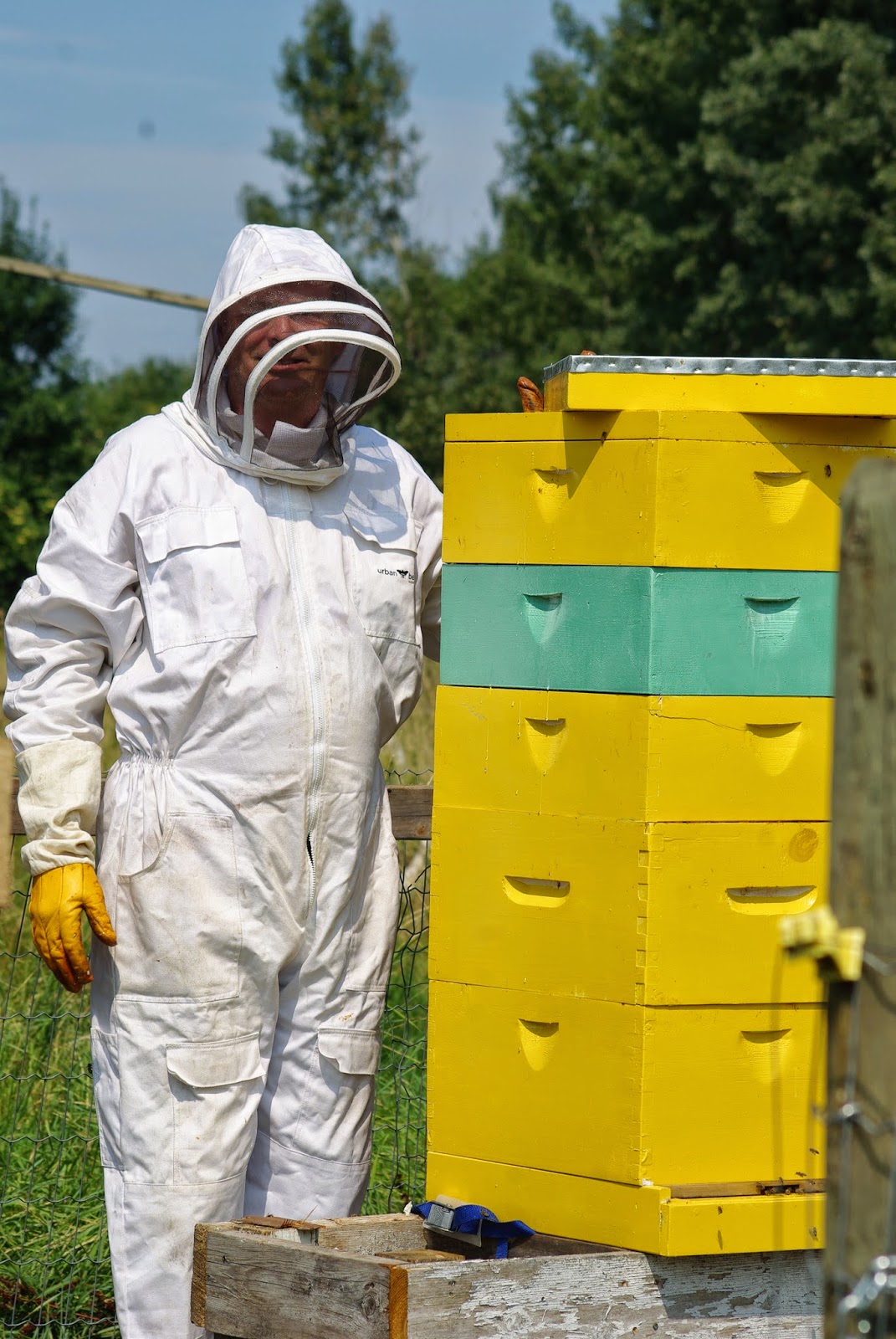 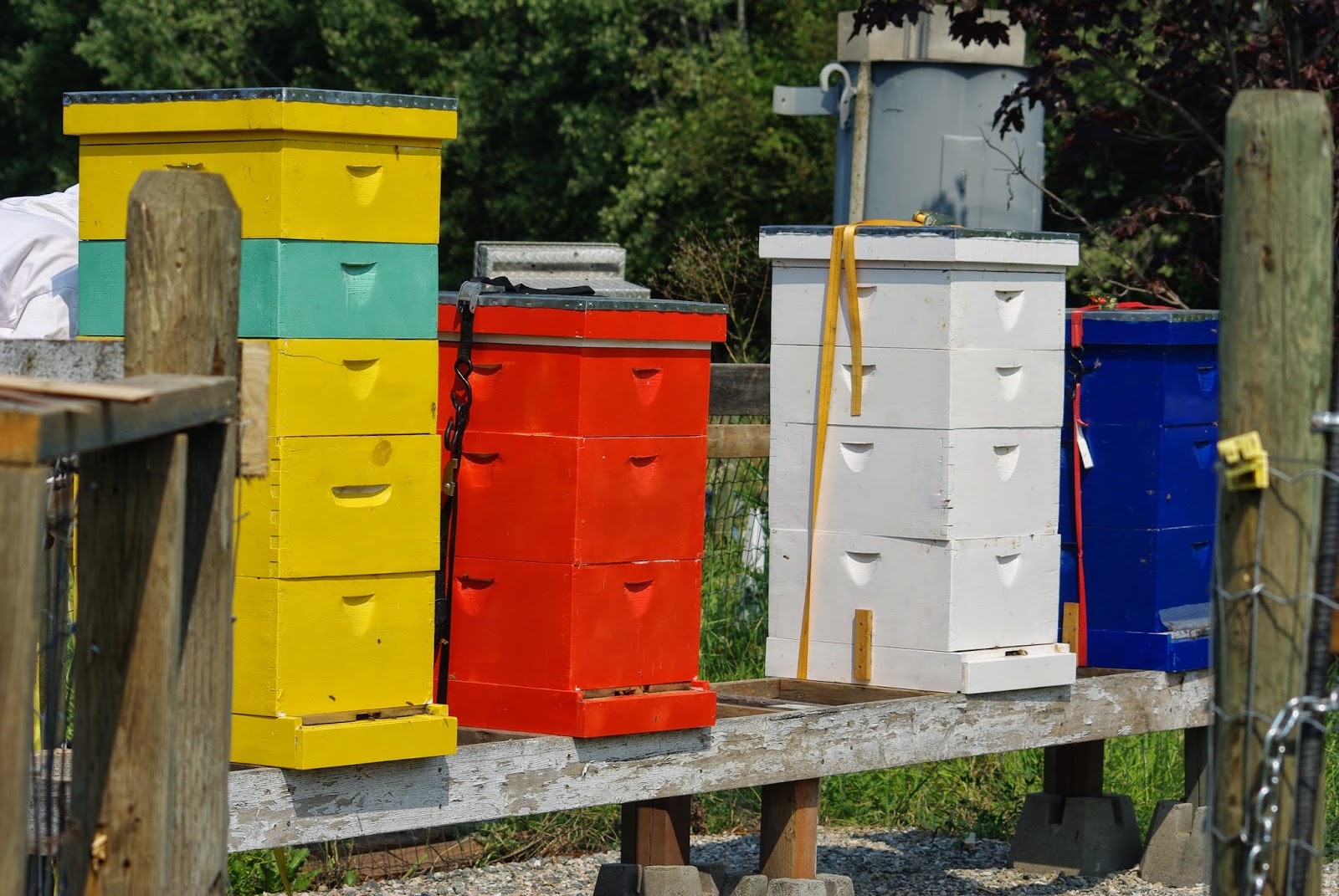 Posted by The Great Hair Migration at 3:44 PM No comments: