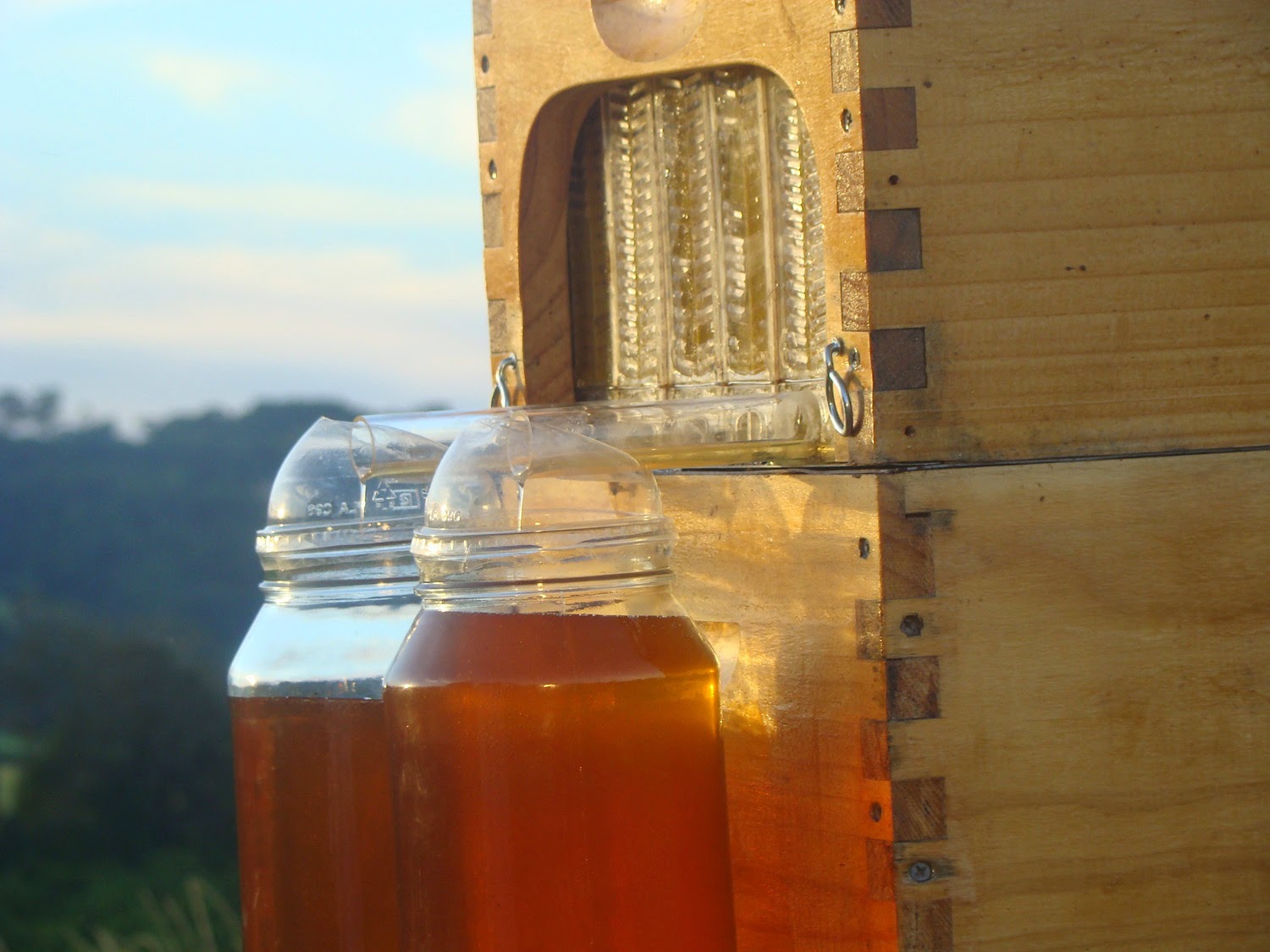 We’ve had a lot of people talking to us and sharing with us information about the Flow Hive! Thanks so much for that. This hive claims that we would be able to get honey from the hive without disturbing the bees. We have been more than curious about it, and hopefully in a few weeks will have a chance to view one for ourselves. We thought, though, that we would share some of our thoughts leading up to this, and share some of the things we will be looking for when we finally see this hive that has seemingly turned beekeeping on its ear. 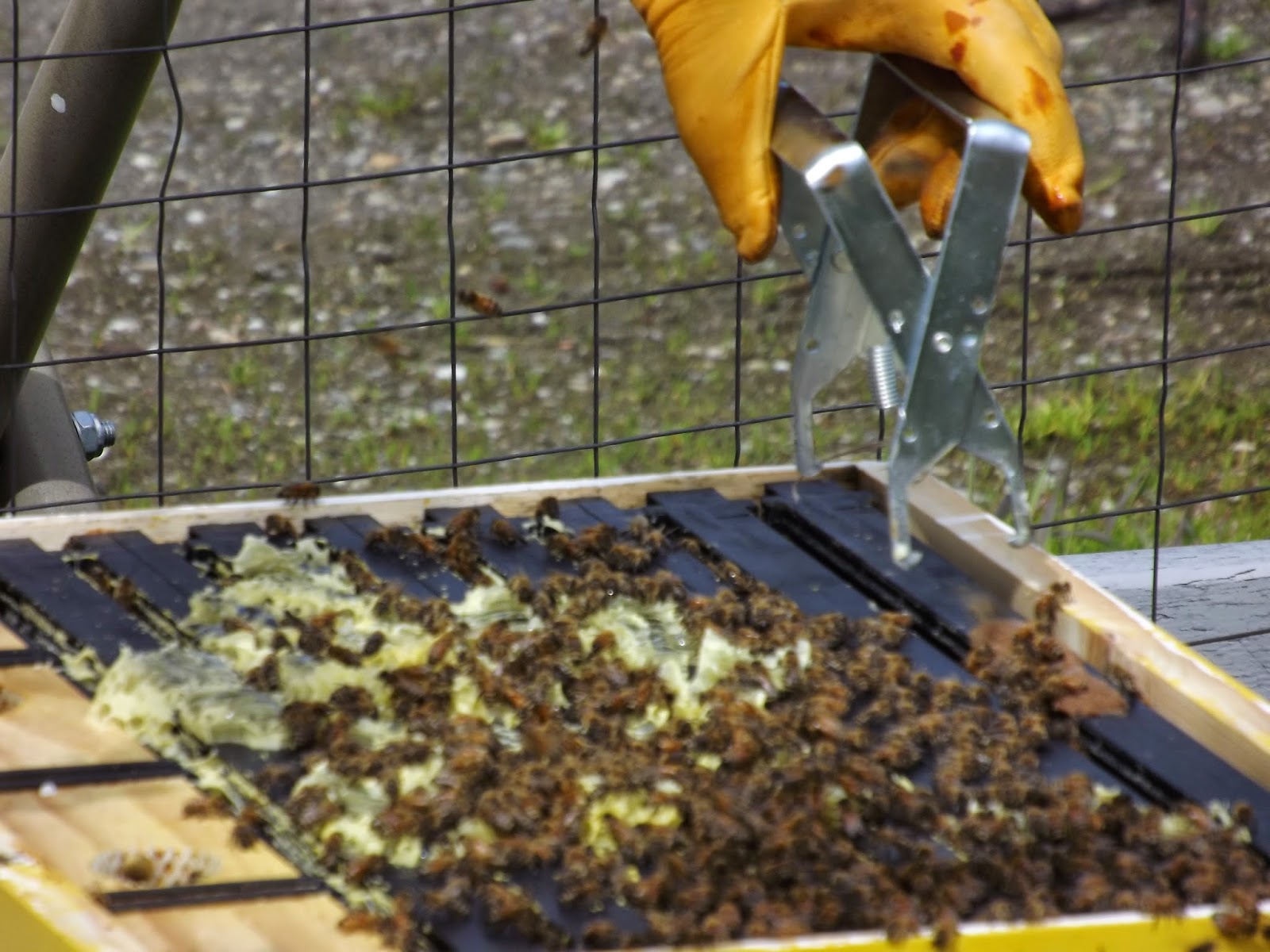 First, one of the big jobs in tending hives is being able to check them to see what is going on inside. That means we need to pull frames, see if there are eggs and larvae at every stage, so we know the Queen is alive and well and doing what she should be doing. It also allows us to see if there are any new queen cells being formed – a sign that the hive could be getting big enough that it needs to swarm and start a new colony, or a sign that the Queen is in distress (or is gone) and needs to be replaced. We also want to be sure that there are no mites, parasites or other problems in the hive; we need to watch for these regularly so that if a problem develops, we can deal with it quickly. The only way to check on these things is to pull the frames and inspect them. Even with windows, you will not get a good view of the activities in the comb or the activity taking place on the inner frames, which so far in our experience has been where most of the action happens. Taking apart the Flow Hive to inspect, with spigots and other equipment there, could become much more labor intensive. 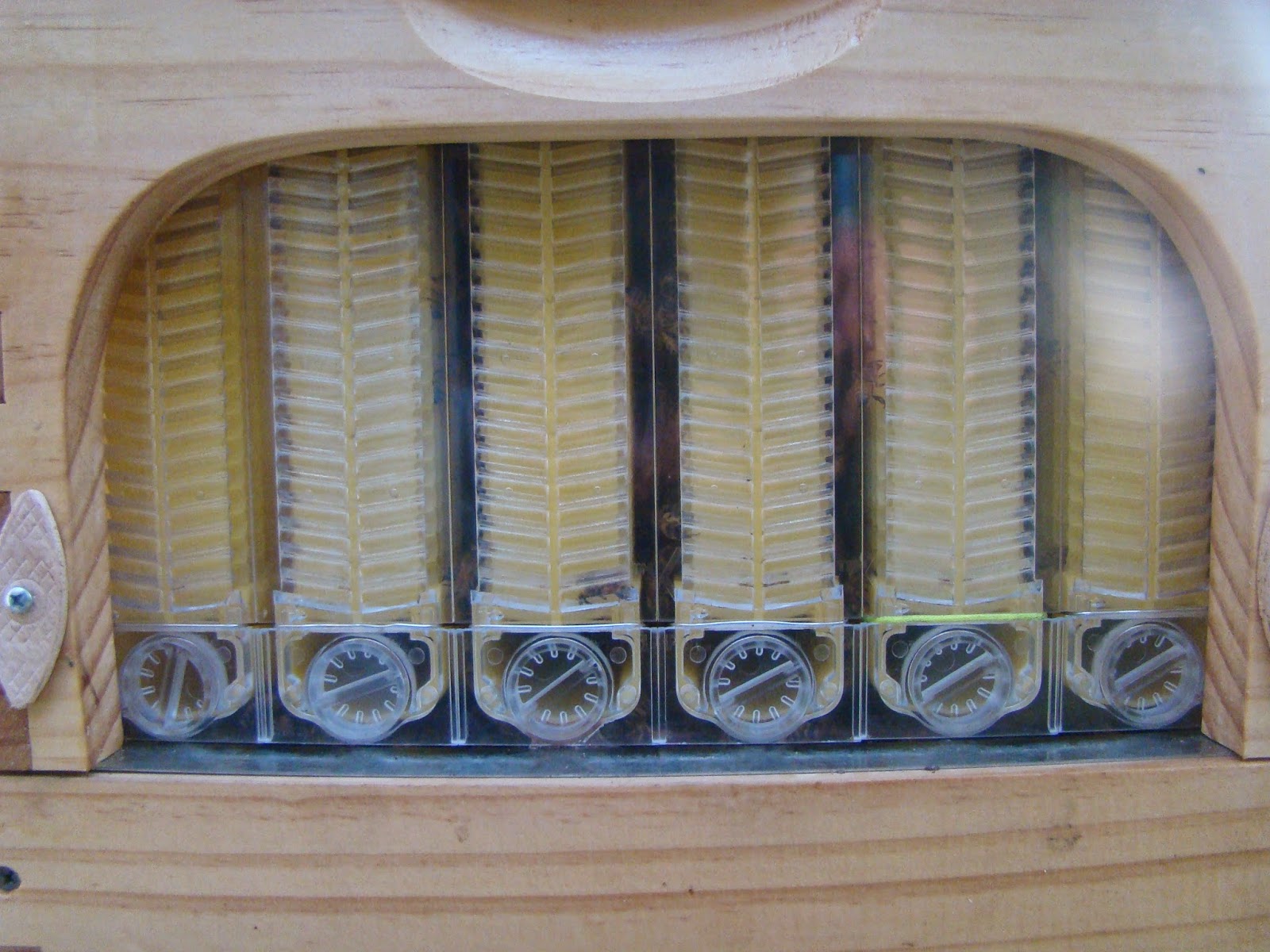 Our understanding at this point of the Flow Hive is that the frames are plastic, and they split open when you turn on the tap, so that the honey drains down and out the spigot. We’re not totally sure, though, how the bees will know that, with the cells capped, their honey has been taken away. The cap will still be there, intact, so the bees will have to learn how to tell when they are empty, and will have to remove the cap so they can then refill the comb. This may take away from their actual production of honey. An additional concern is the plastic frames themselves. Plastic can absorb what is around it, including pollutants and poisons. They will need to be replaced more often than our current frames require. 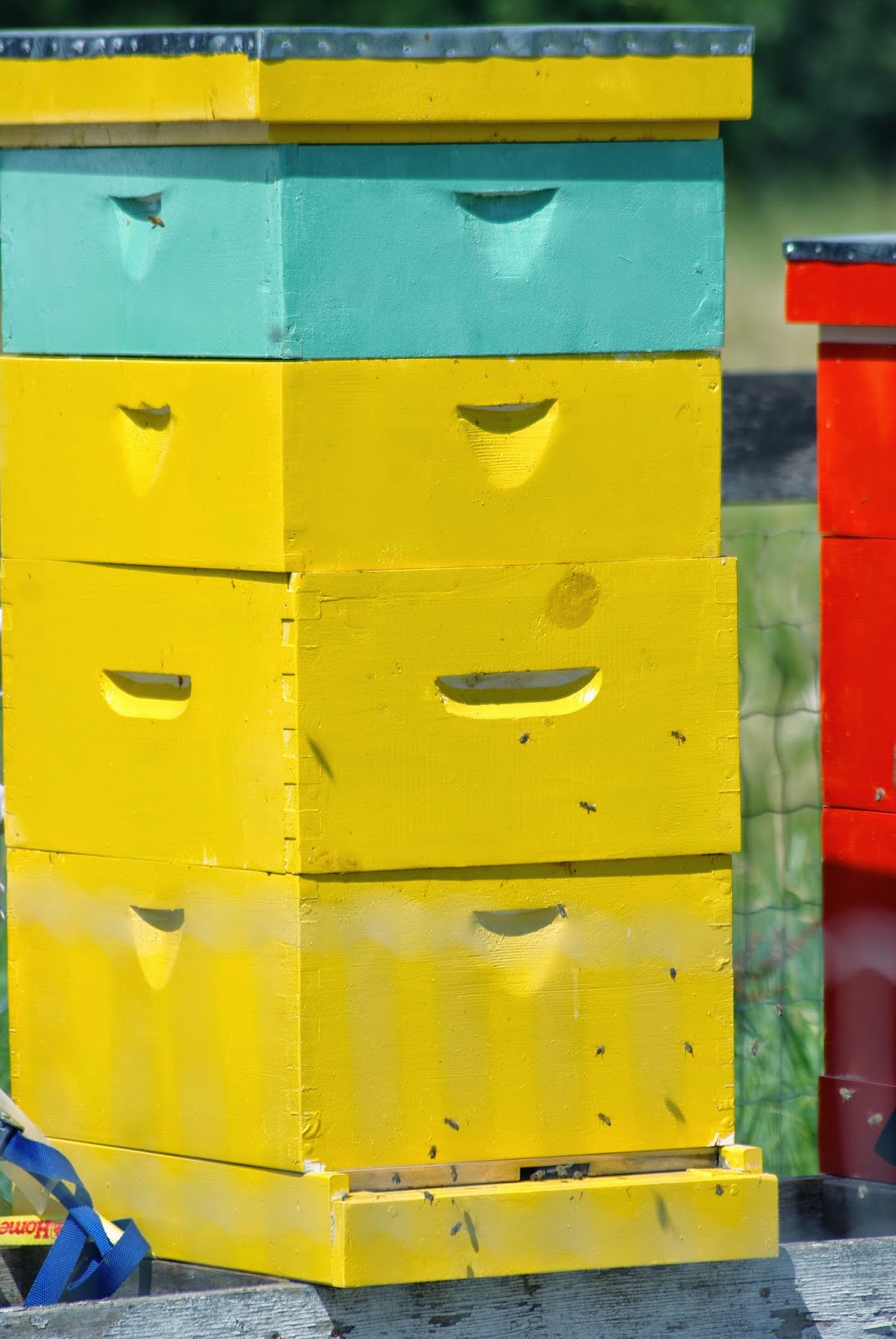 Another thing that we need to understand is the hive structure. We have two large bee boxes that house the bees and larvae. Both boxes are used for that, to keep the hive healthy and to ensure you always have a steady supply of new bees. When they start producing honey in the summer, they store that near the top of the hive, in what we call honey supers. In the Flow Hive, there are only two large boxes. That would mean they are using the second box for honey production instead of bee production. How does that impact the hive overall? When we remove the honey, we just remove the honey super, leaving the rest of the hive untouched, so we’re not really sure what the benefit would be.

It will be interesting as well to see how they deal with ants and other pests. Having honey outside the hive will be an invitation to wasps, ants and other critters we do not want trying to get into the hive. It also means that the honey is more accessible/tantalizing to skunks, bears, raccoons, etc. Do we have to remove and clean the spigots every time and does that require taking the boxes apart? How do we keep it all clean without having to break down the hive, which is the thing this hive is supposed to circumvent? 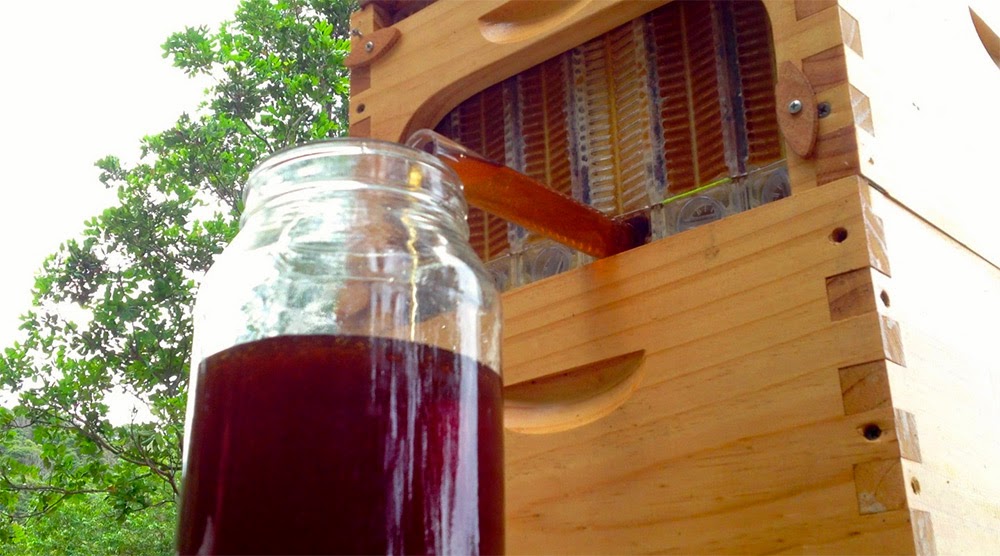 When we first saw the information about this hive, we were skeptical, to say the least. Information on the internet shows that it’s been around since about 2008, but has only gotten legs now. It was the subject of a huge crowd-sourcing effort of late and we honestly wondered if it was nothing more than a scam. That said, several well-known and reputable beekeepers have said they’ve seen it, and were impressed, so we will absolutely go into this with open minds. We’re excited about going to learn more about the hive in a few weeks. Hopefully our questions will be answered. Then the next issue will be if the cost of a Flow Hive, for anything more than a promotional/education tool or as a novelty, will pay off. 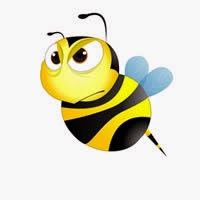 Now for a quick update on our own hives. We checked them a few days ago and gave all of them (except The White Outs and the Moody Blues) pollen patties. None of the hives had touched the sprinkled sugar plates we put in with them. We didn’t give pollen patties to the Moody Blues because we thought we had lost that hive. There was no activity in it at all. The White Outs missed out because, well, they had a few attitude problems when one of us (who shall remain nameless) mistakenly grabbed at the hive to pry off the lid and in the process slammed his hand over the upper opening... and about 300 bees. They will get their patty this weekend. On a more positive note, in the last few days, with warmer temperatures, we are seeing some activity around the Moody Blues, so maybe they were just really hunkered down because of the cold. We’re hoping so anyway.
Posted by The Great Hair Migration at 9:35 AM