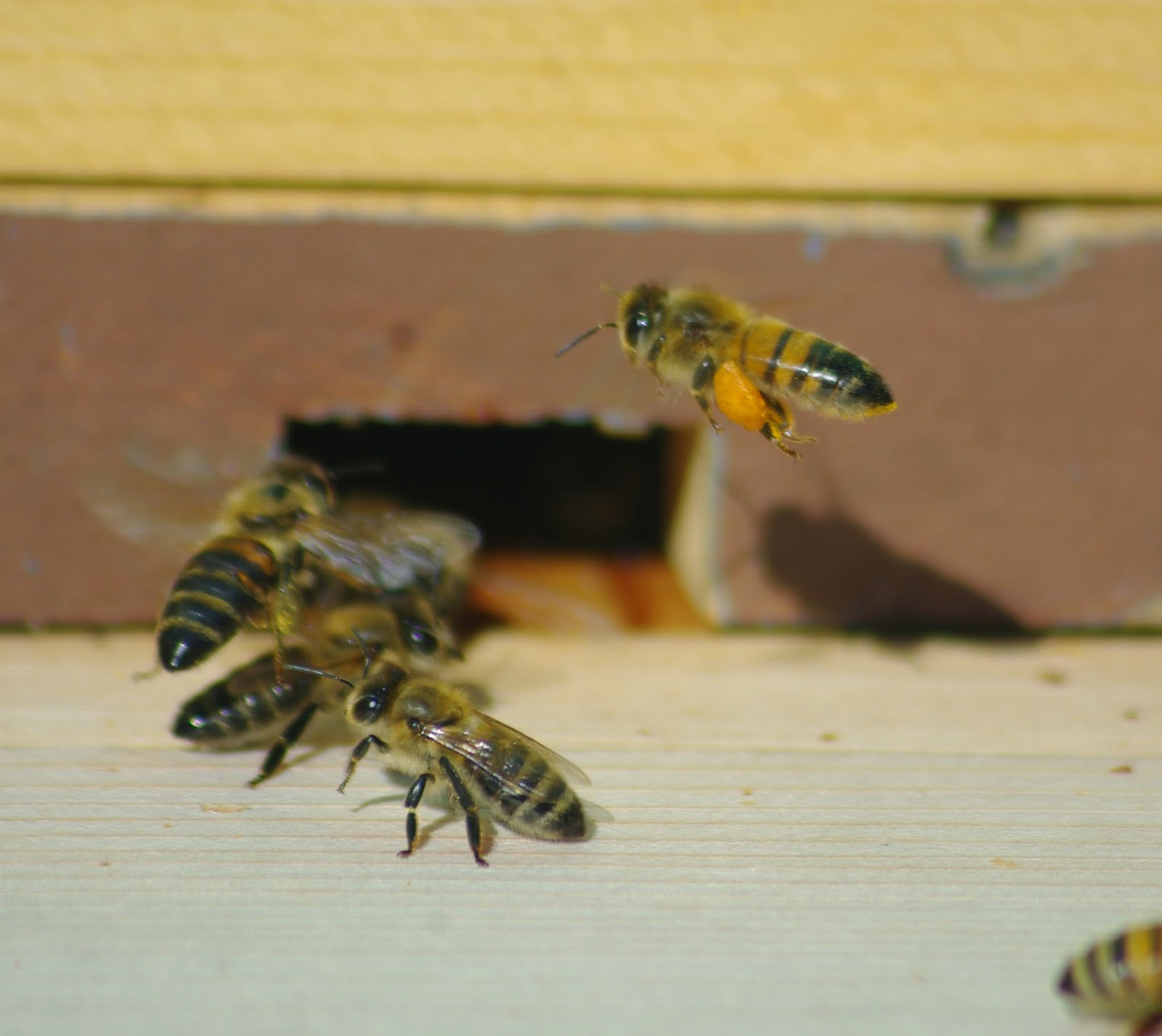 Yes, we are talking about drones today – the male of the species. There was some discussion about titles for the blog today – Drone It Make You Want To Go Home, and Droneo oh Droneo. All three are relevant. Drones are the playboys of the hive set. They’re born, they mate, and they die. Well, if they’re lucky, they mate (although that could be subject to interpretation, I suppose).

Today, while watching the hives in action (a not rare pastime around here), we were able to see the drones outside the hives. The workers were working – some bringing in absolutely HUGE loads of pollen, some cleaning, some defending the hive. The worker bees are all – surprise, surprise – female. The workers are the smallest bees in the hive. The drones are slightly bigger, and the Queens outsize them all. We’ll talk more about the workers, and the Queens, later on in the year. Right now, it’s drone time! (although we were absolutely thrilled to see so much pollen being gathered at this time of year). 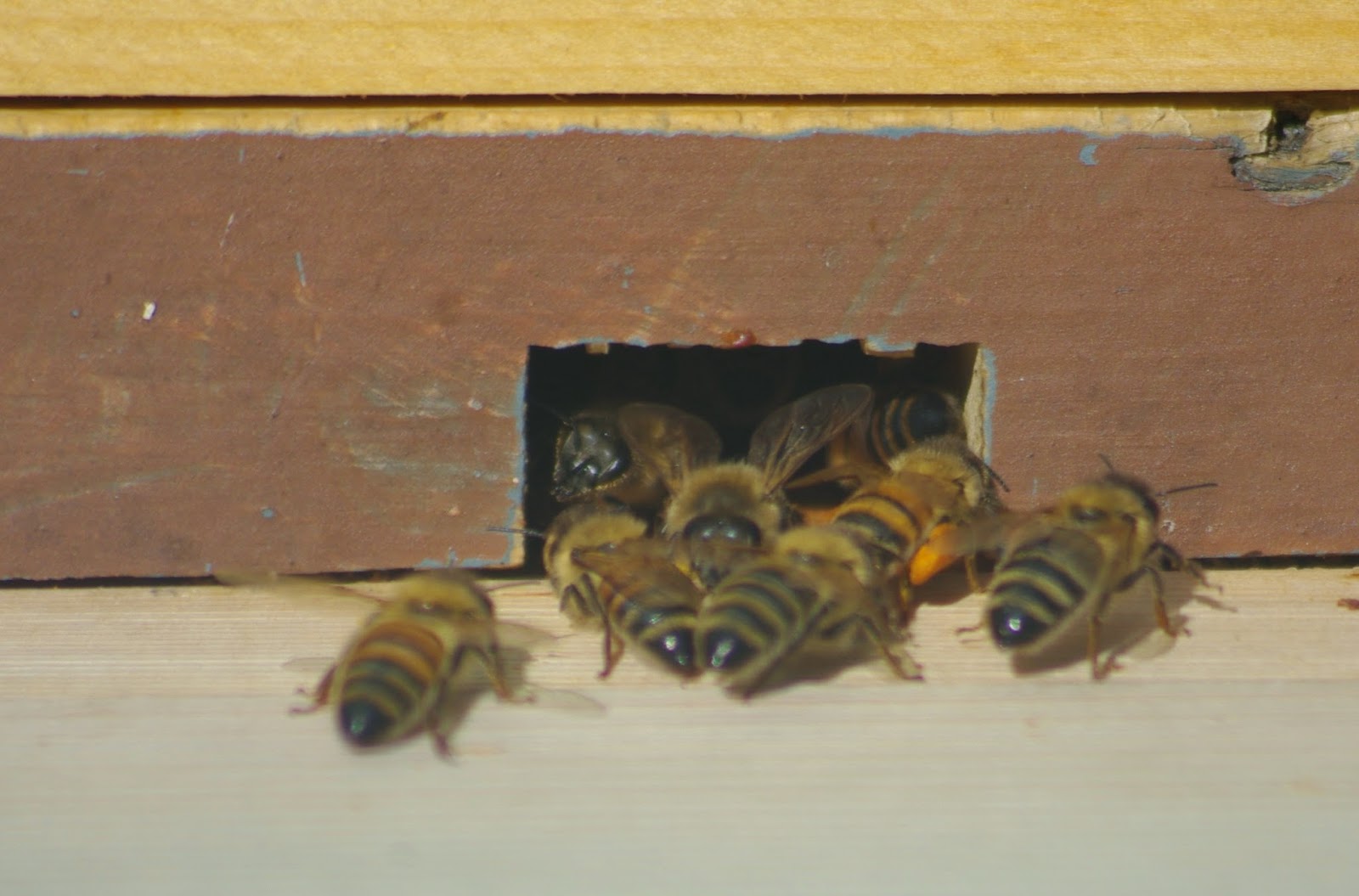 Drones – they take the longest to mature (no, we shouldn’t be surprised at that, should we?). They are distinctive because of their size, but also because of their huge eyes. You would think that they are built this way in order to better defend and protect the hive, but no. They have no stinger, so they are not a defensive creature. When they hatch, they are fed and cared for by the workers. Then they leave the hive during the day to try to find some sweet new Queen bee on one of her (usually) three nuptial flights. When they do find one, they lay on the charm, hoping to be one of the twenty or so men she will take a shine to. Here’s the thing though – once they have mated with her, that one time, they die, because she rips off their reproductive organs and carries them with her. She stores the sperm in her spermatheca where she can then get it when she is laying her eggs (which she will do all day, every day, for the rest of her life).

When the hive needs drones, the Queen will lay unfertilized eggs that will then become males. She never breeds again, other than on her nuptial flights, and no mating is ever done within the hive. When a new Queen is ready to be bred, she finds drones from another colony, thus keeping her hive strong and healthy. A colony will produce several hundred drones (compared the tens of thousands of workers it produces) so seeing the drones is always a good sign of a healthy hive.

But, females can be pragmatic critters, and when it comes time to prepare the hive for winter, they are worried about having enough food to last. They know the males will do nothing but help deplete stocks, and they know that the queen can create new drones within 24 days, so when the going starts to get tough… the men get going. Yes, the workers will force the drones from the hive, which is again another death sentence for them. (To be fair, they only live about 4-6 weeks anyway.) As we watched today, the workers from The Dregs were having no argument. The drones were being pushed out, sometimes dragged out, and occasionally wrestled out of there! They didn’t want to go, but then again, they were living a pretty charmed life – no cooking, working, cleaning or helping with the kiddos. In a hive, if you don’t work, you don’t last.

It’s another sign that the bees are getting ready for winter. We will be helping them in the coming weeks, but for now, as long as they’re pulling in the pollen, we are going to let them. The nights are cool, but there are still some good bee-flying days ahead… unless you’re a drone.

Posted by The Great Hair Migration at 3:00 PM