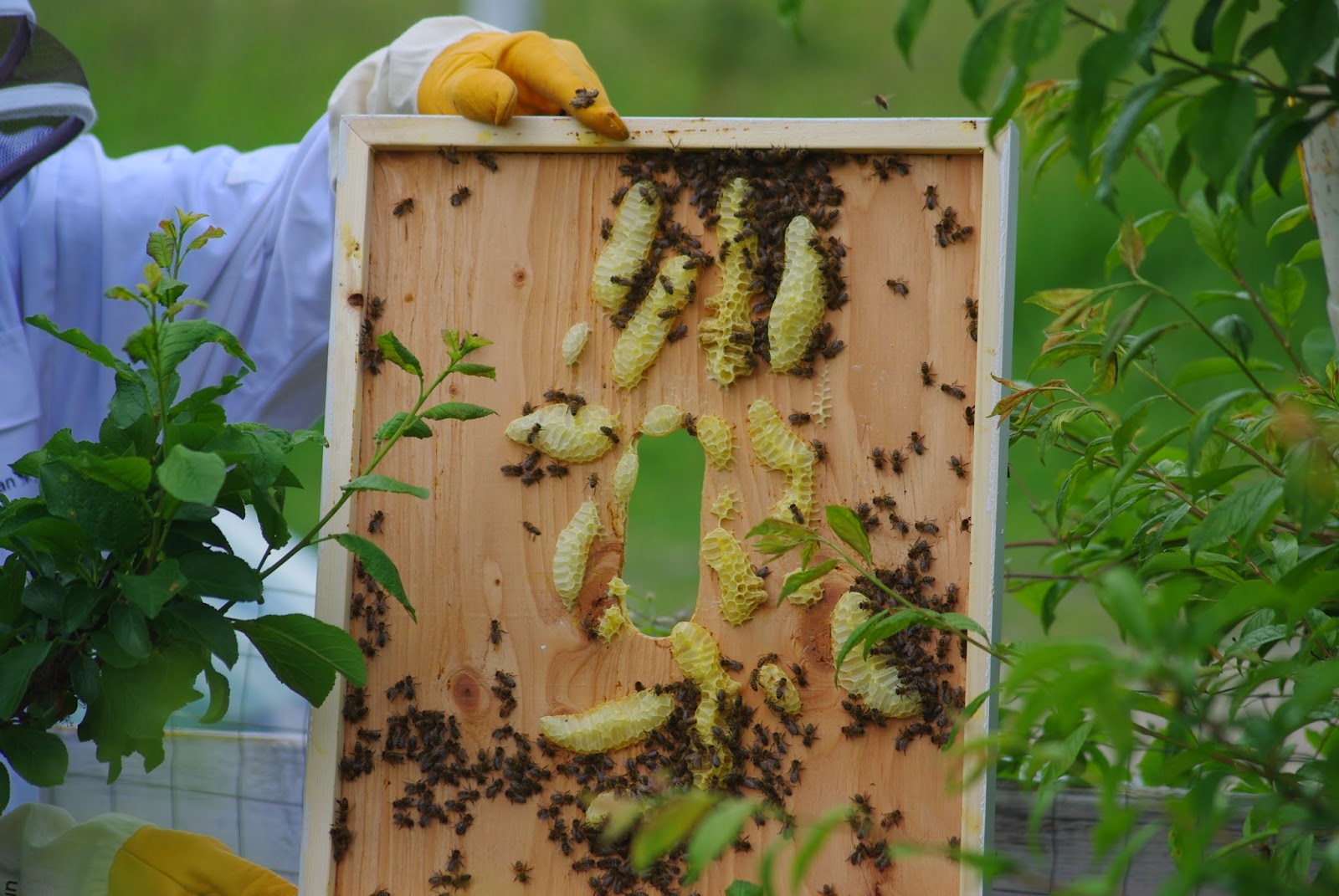 Well, our bees are certainly earning their keep... at least the Mellow Yellows are. Team Tangerine has some catching up to do! We checked the hives this afternoon, peeking into the top box first, and we were very happy with what we saw. 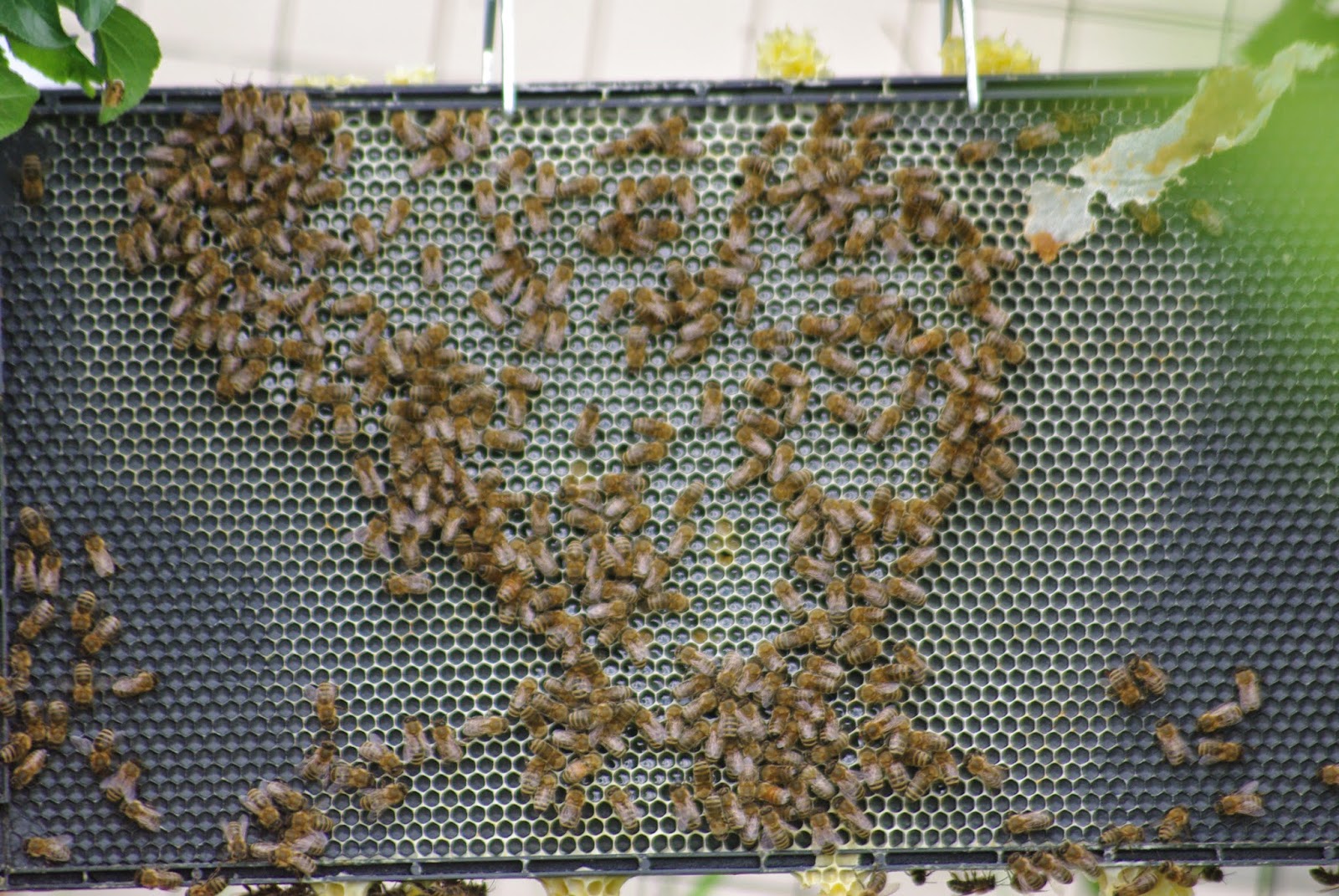 TT is creating comb on the top box, and there are some cells with larvae. They have gone through their protein pad and their juice jug was empty, and we decided to leave them that way for a while. There are so many plants in bloom that they will not go hungry. They seem to have taken a shine to the burning bush, which is in bloom right now. We wouldn't have known it was in bloom (because the flowers are very nondescript) if it hadn't been for the bees gathered around it. The trees out front are just starting to bloom now, and those will keep the bees more than well fed. TT had an increased population of bees, and new ones are doing the dance outside the hive daily, but we don't need to add another box to their stack yet, and we didn't open their doorway more. 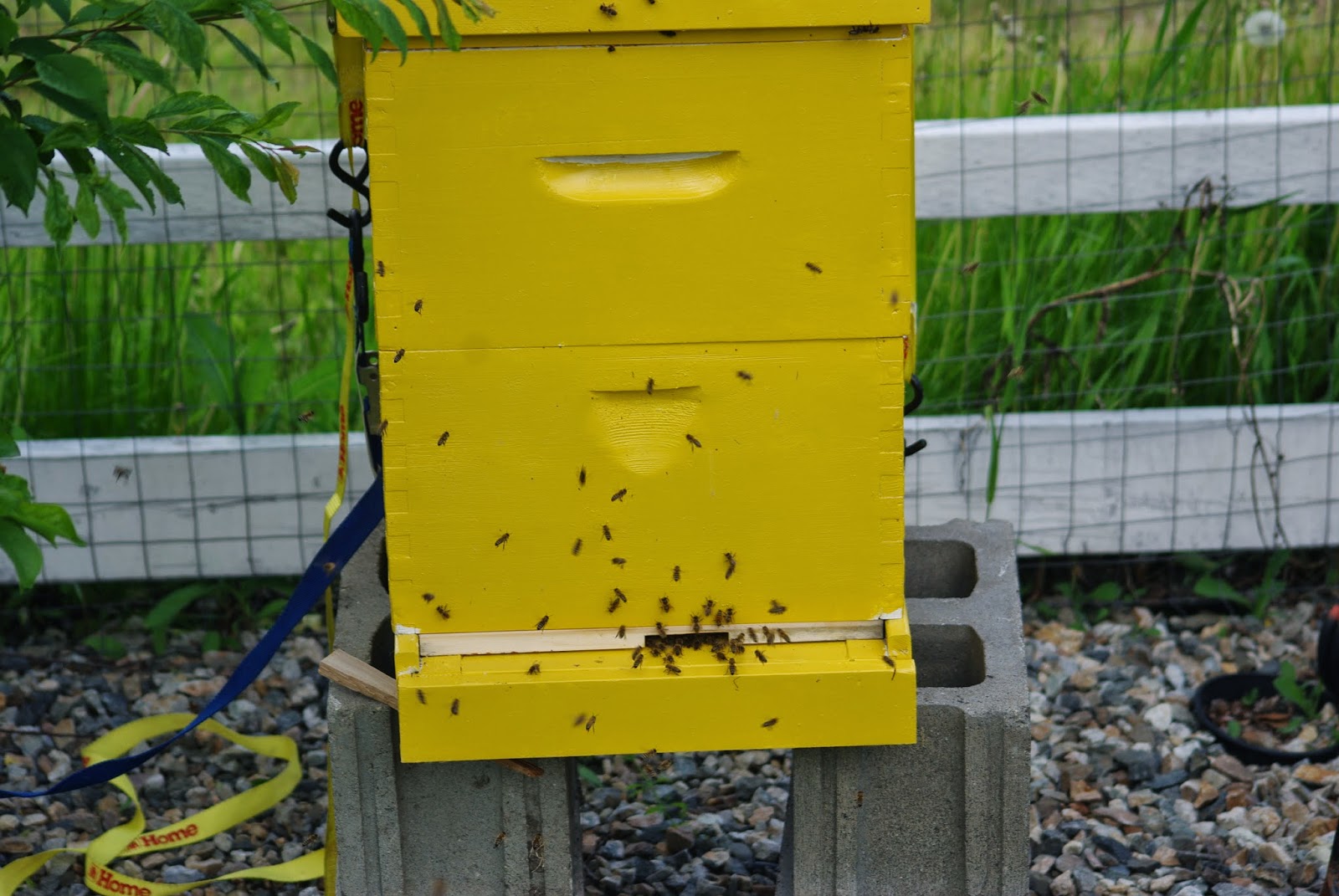 As always, the Mellow Yellows were next, and wow! They have comb and are laying a lot of babies in most of the frames in their second box, and in the lid as well. There were a LOT of new bees... enough that we had to smoke them a bit more to calm them, and enough to make us give them a bigger door to go in and out. We were so surprised by the progress made in the top box that we just had to open it up and see what was happening in the box below. The comb down there is darker, and gets even more so with each brood of babies they hatch out. They are busy filling out that comb with honey... LOTS of honey. (Now comes the fun of keeping the wasps and hornets away, and man, do we have those again this year.) Mellow Yellow's amazing progress probably means they will be getting a new box again by next weekend, and will be three boxes tall with a medium depth one for honey on top. The experienced apiarists in the area tell us that peak honey flow usually happens around the summer solstice, so we are just in time. We will also be starting three new hives this week. Finally, we will be receiving our first 'nucs'. It took a long time for the bees to be ready to breed because of the very cool and wet May weather, but we will finally have some local home-grown bees of our own. They get handled differently (at least as far as introducing them to the hive goes) so this will be yet another new experience for us. 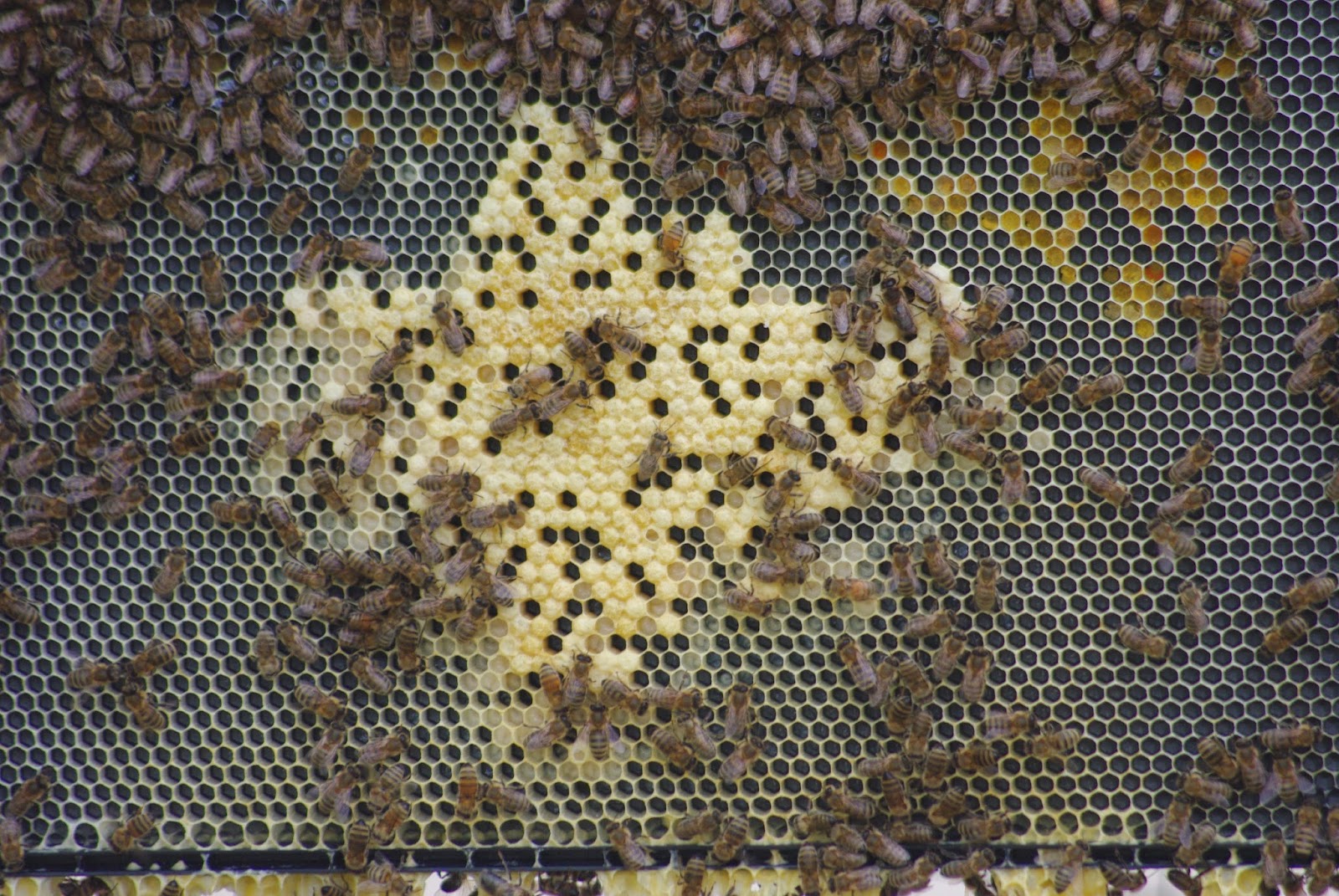 We also have another bee suit, so if you're interested in seeing what we're doing, you're welcome to suit up and have some fun. This way, you get a front row seat for all the action. While we were working with the girls today, we had another guest show up -- a rhinoceros beetle, which isn't supposed to be here in June, but we weren't complaining. 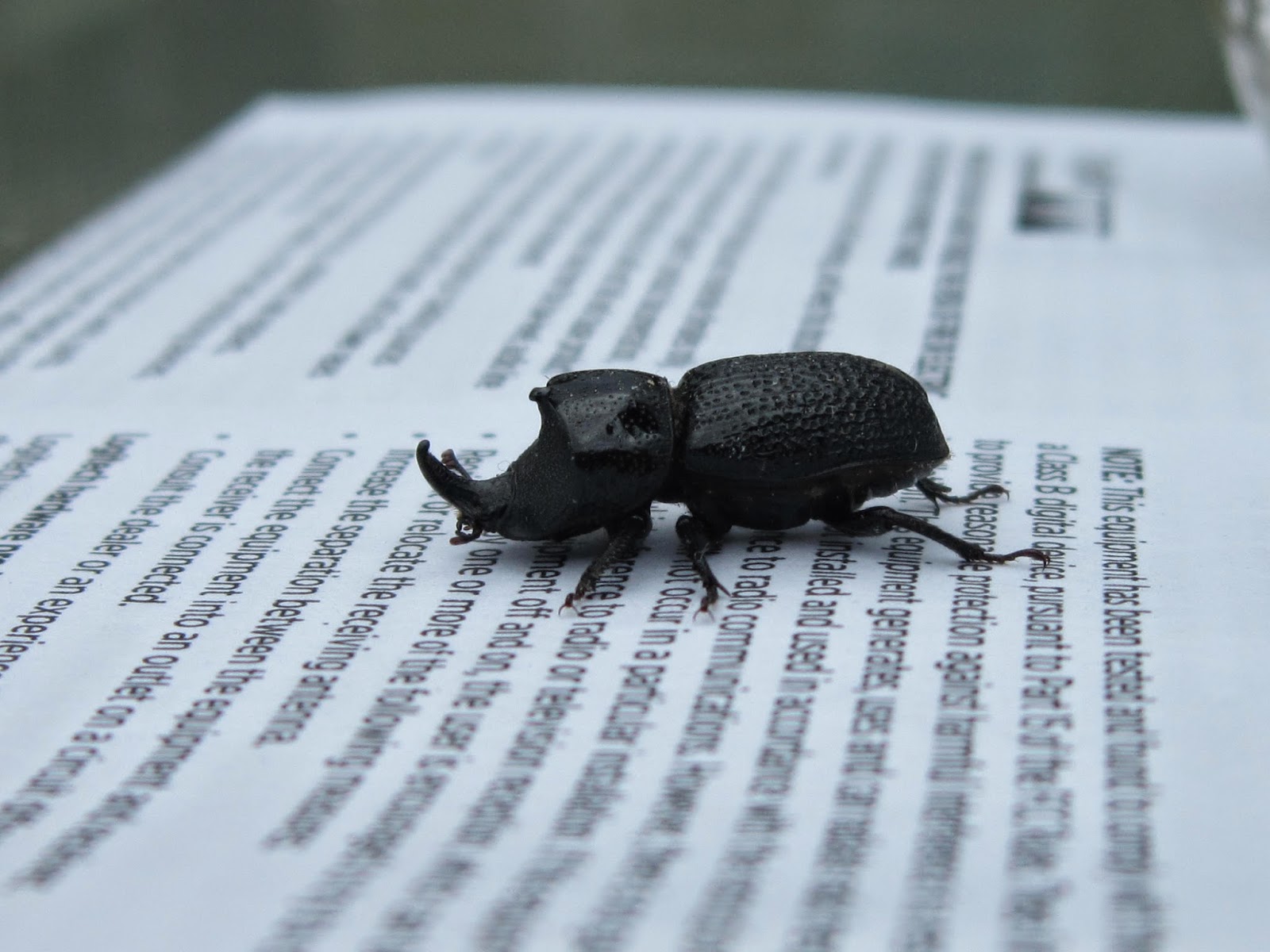 We'll include some pics of the honey cells, the frames loaded with pollen, and one that has a really amazing picture of the bees' tongues -- yeah, they have tongues! Who knew? 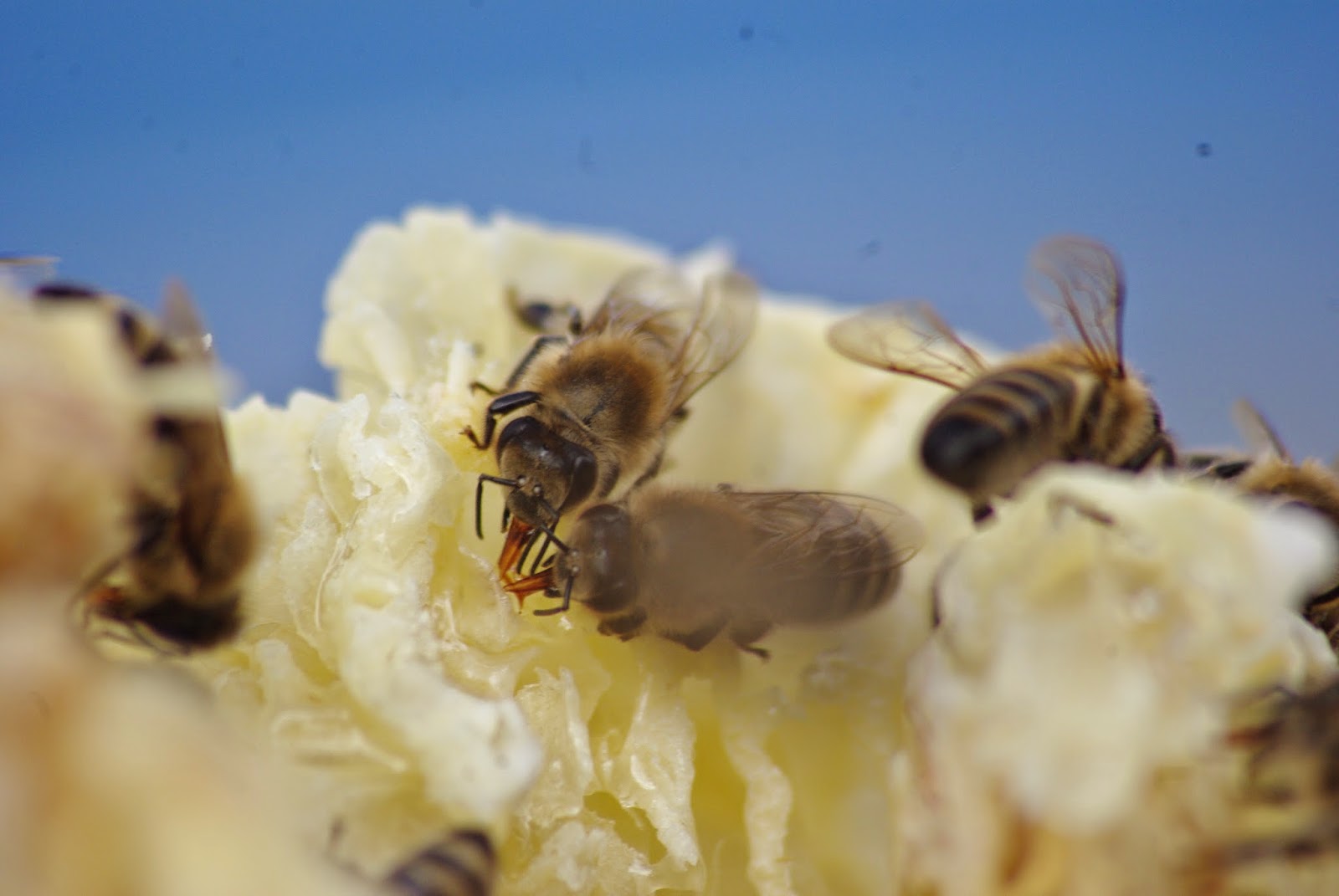 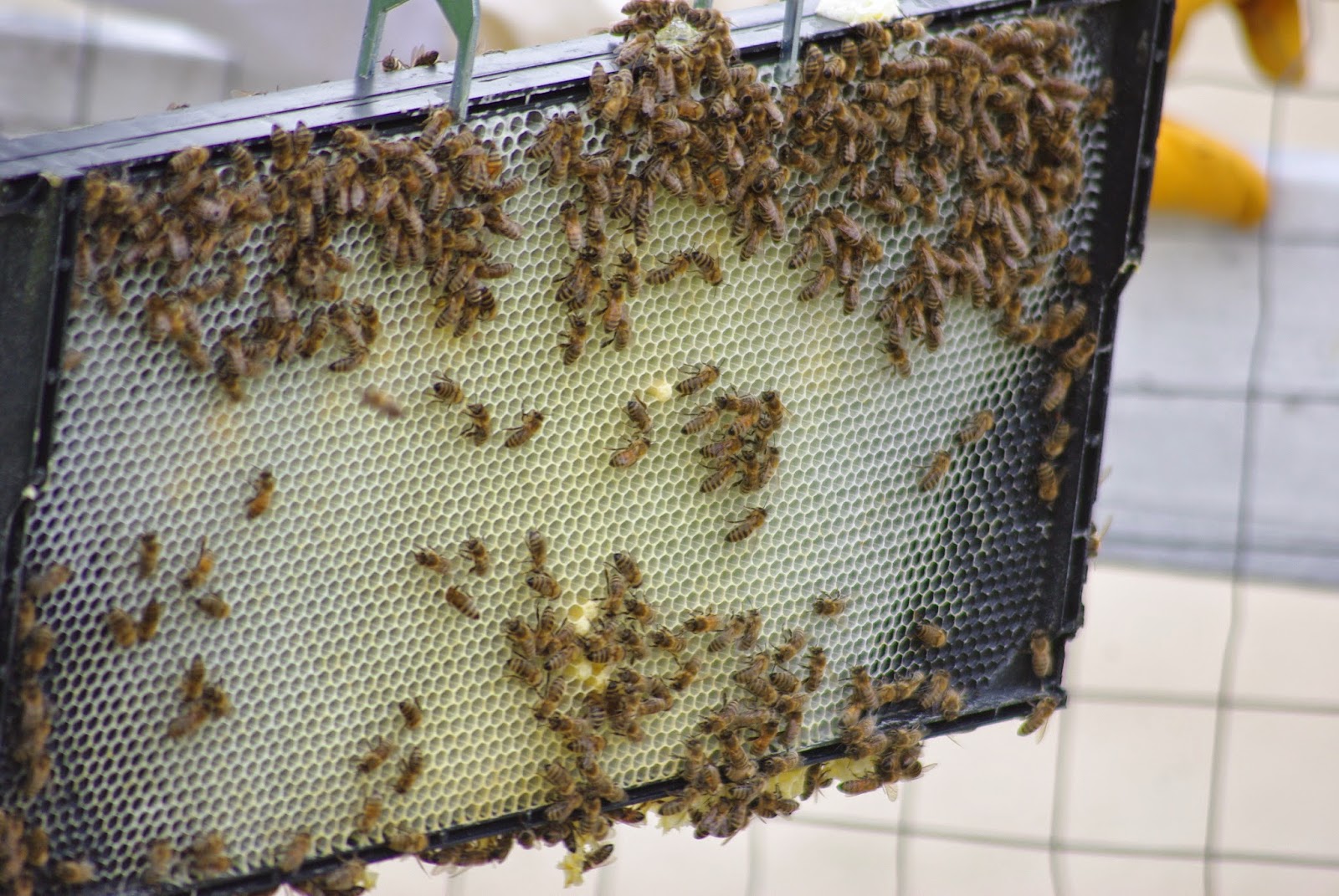 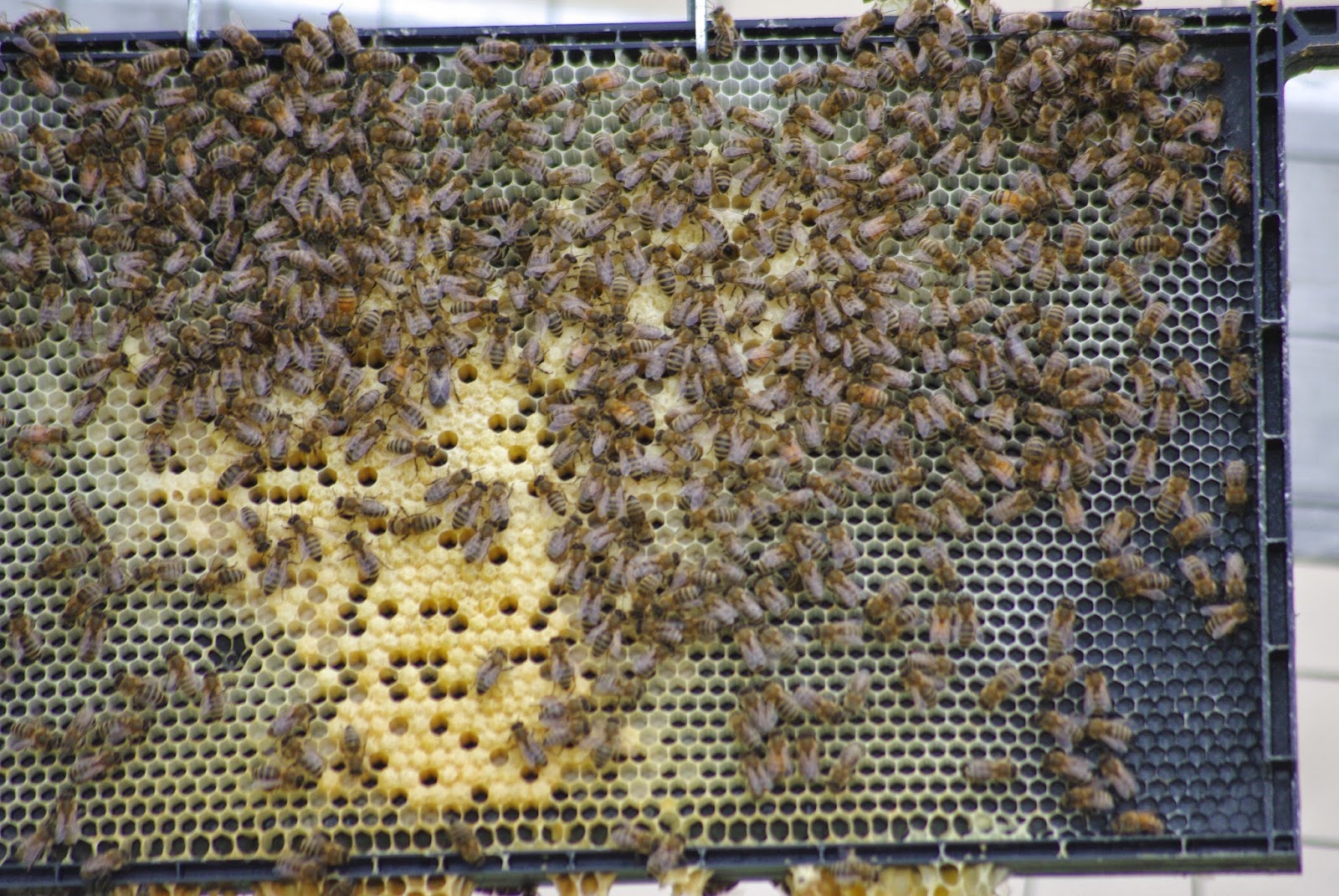 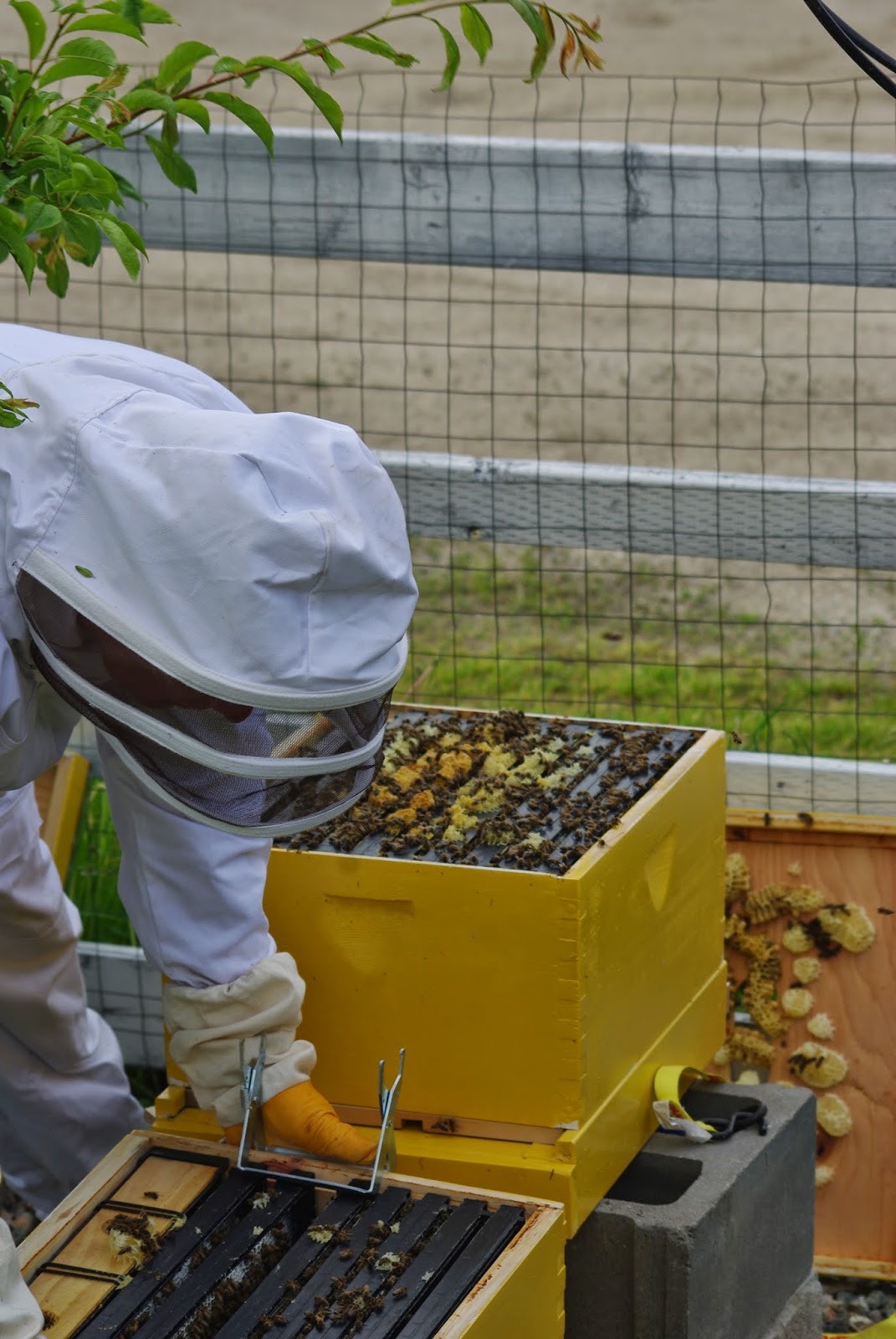 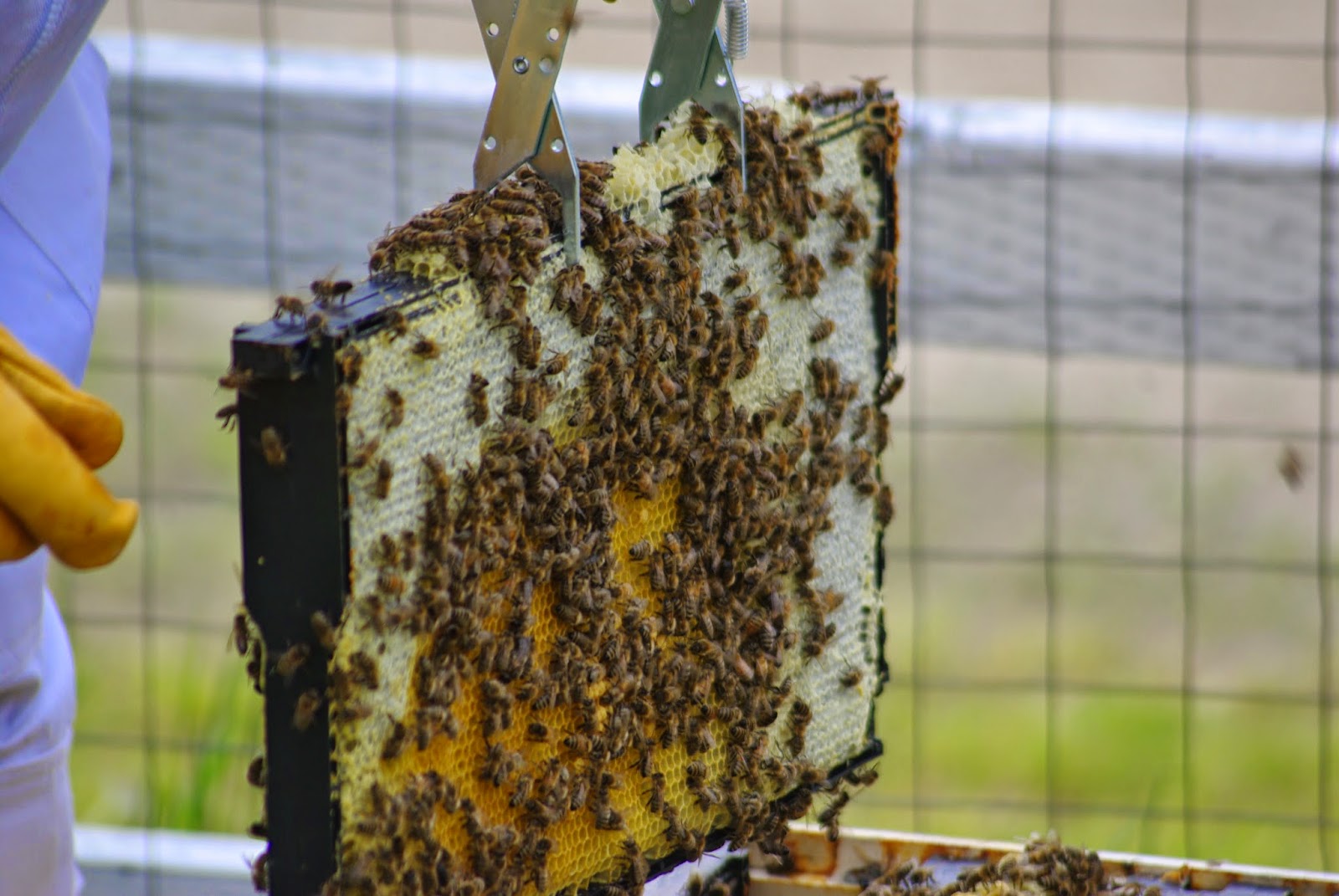 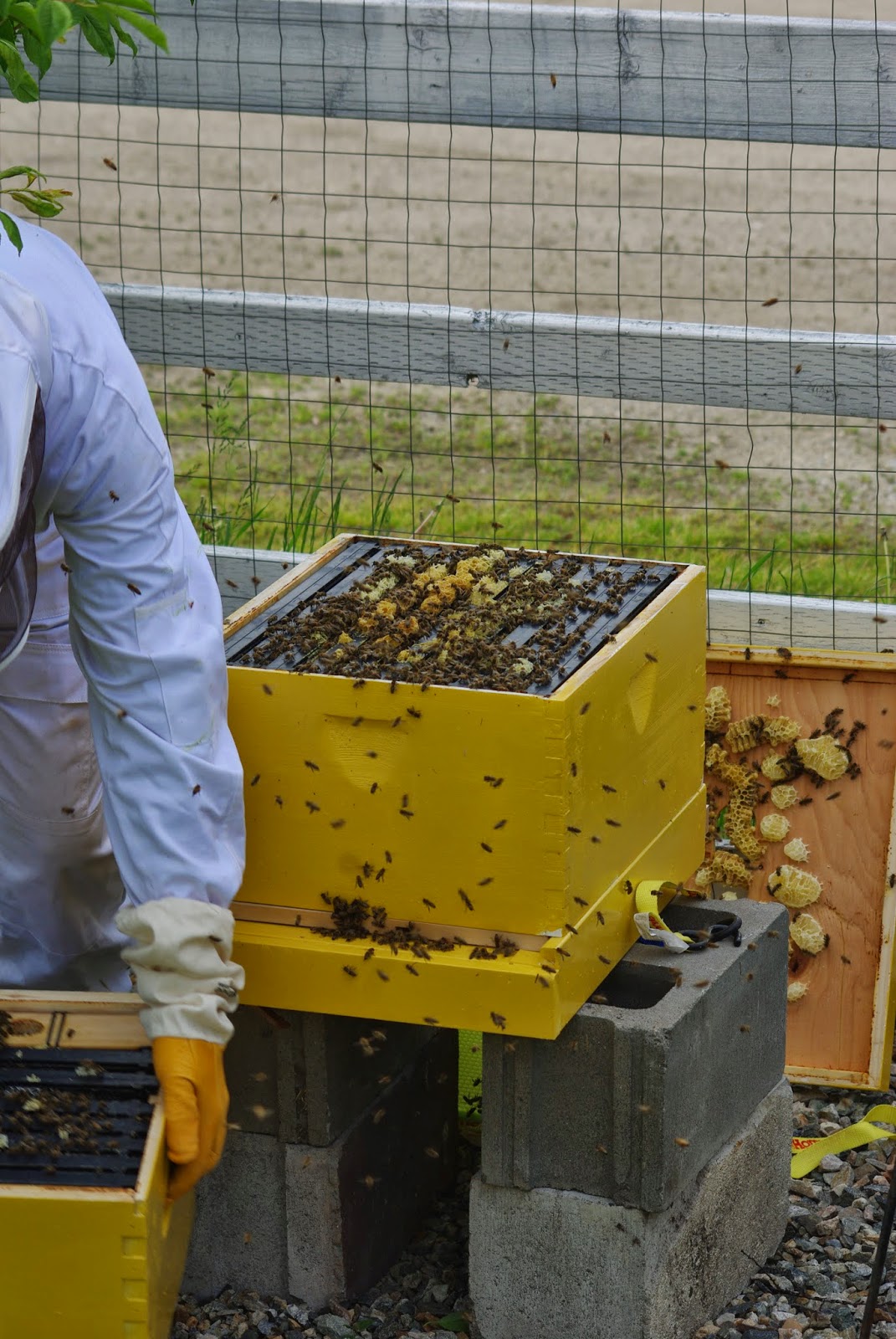 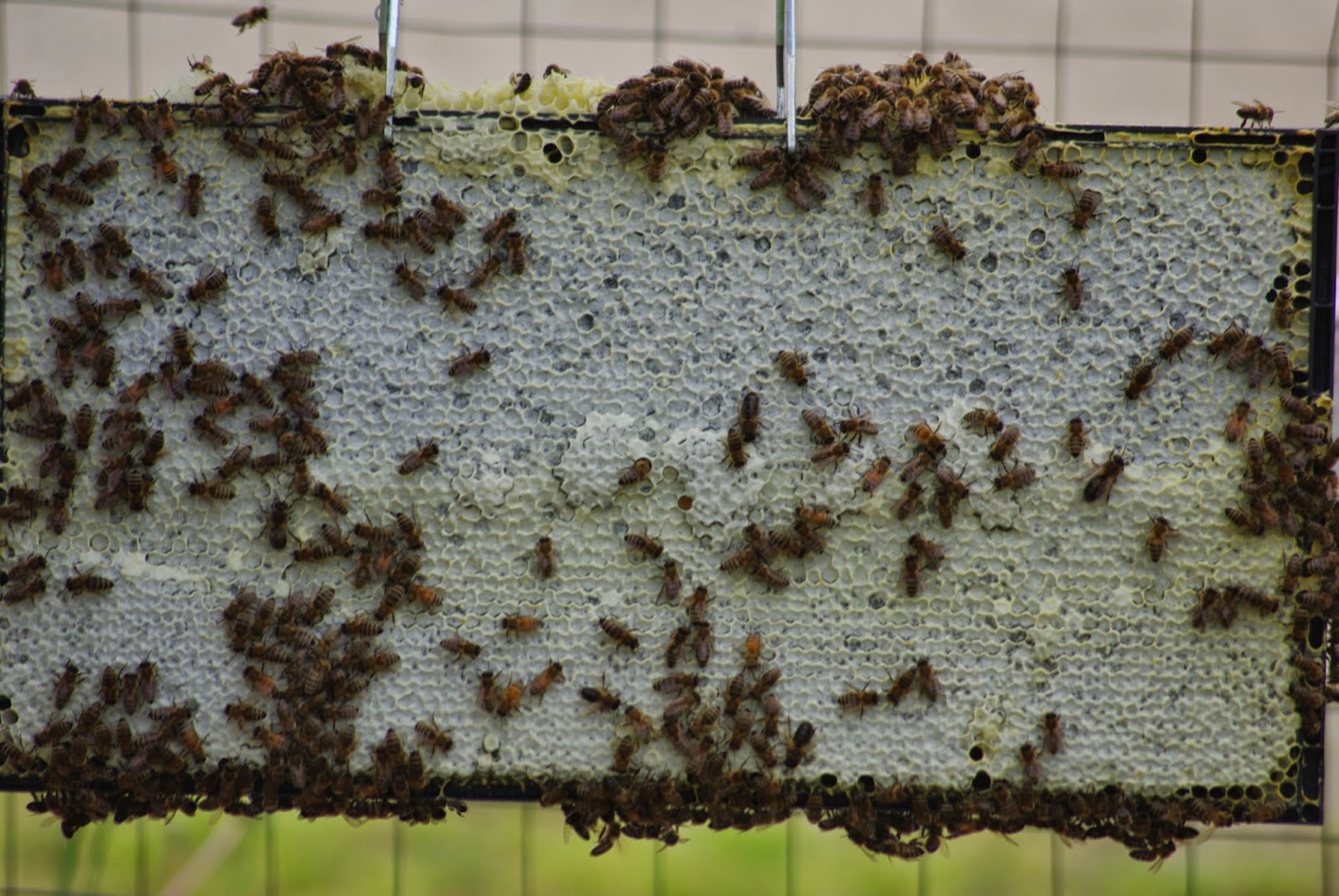 Posted by The Great Hair Migration at 8:23 PM